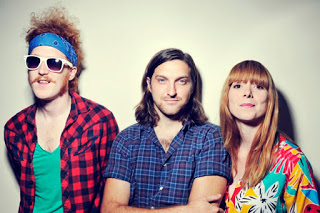 Photo courtesy of Shervin Lainez
The Spring Standards
Club Cafe
Saturday, August 18, 2012
Southside
“The Spring Standards are an energetic force of three-part harmony
circling over a rock n’ roll sound with an old country aftertaste. From
small towns to big cities, they explode on stage with spirit,
spontaneity, and a style all their own. They are, in no particular
order: James Cleare, James Smith and Heather Robb. Each member of the
band is a songwriter and multi-instrumentalist, and they use their
strengths as a trio to create a sound that listeners might expect from a
band twice their size. With an emphasis on three-part harmony and a
variety of instrumental switching, their range and energy make each live
show a unique event.”
The band recently opened  for Rhett Miller at Club Cafe and word on the street was that “they killed”! They return this Saturday to headline with support from Sephus Lee and Household Stories. My thanks to Heather Robb (Vocals, Multi-Instruments) for taking a few moments to play along with this edition of First/Last.
The first album you ever bought?
The Bangles, “Different Light”. On tape.
Your last album bought?
Father John Misty, “Fear Fun”. On iTunes.
Favorite album of all time?
It’s so hard for me to choose favorites but if I have to say one, I’ll go with
Joni Mitchell, “Blue”.
Least favorite/most disappointing
album?
I was very disappointed when Bon Iver’s “For Emma, Forever Ago” ended. Does
that count?
First concert attended?
Alanis Morissette.
Last concert?
Dirty Projectors and Wye Oak.
Favorite concert ever?
There are so many greats, it’s really impossible for me to choose. A recent
great one was Peter Yarrow at the Stan Rogers Folk Festival in Nova Scotia. The
audience sang ‘Puff the Magic Dragon’ with him, it was pretty magical.
Least favorite concert?
Same festival, Crash Test Dummies. The lead singer guy was just mean and
bitter, it sucked.
Any thoughts, experiences
about Pittsburgh?
We love Pittsburgh. It’s such a beautiful city and we’ve got some wonderful
friends there. Great food too! Not easy to run in though, those hills
are brutal.
Thanks, Heather. Really looking forward to your set this weekend.