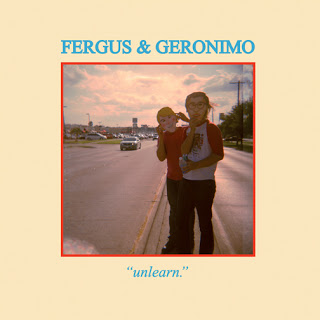 I listened to this wildly, wonderfully weird record a ton over the last year. I was way too psyched when they booked a show at Garfield Artworks in February. I haven’t been this excited to see a band in a very long time. I get to the venue and openers Ursa Major are setting up and I was wondering if the guys were downstairs or what? Turns out after about twenty minutes, Manny answers the phone and explains to the few people there that F&G are on their way! Oh, O.k….well, where exactly are they? On the turnpike outside Somerset! Let’s see, it’s 8:30 now, by the time they get here set up and start playing it will be close to 11:30-ish maybe midnight. I only have to get up at 5 A.M….Bummer. I begrudgingly bail. Thinking they might possibly schedule another Pittsburgh date as they tour the hell out of promoting this album, right? They do play Pittsburgh again. A few months later at Ursa Major’s Doo Wop mansion. Too bad I didn’t find out about it until that day and couldn’t swing it! Unbelievable. Oh well, someday I’ll get to see them, I think? Until then I do have the kick ass album to listen to. Here’s a fun First/Last from Jason and Andrew from back in February.

Andrew: I tend to like cities with rivers. Jason added, “Sorry, I wrote the answers while drunk, I hope they don’t think I am being an asshole. Ha ha”. Thanks Hugh!!!