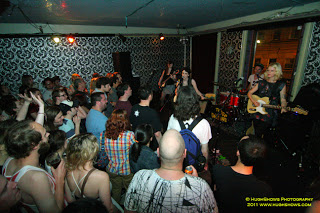 As I previously mentioned, this show was such a surprise to me AND to the band. There is an indescribable energy, that very rarely happens at shows, where the band and audience are in some sort of cosmic sync. This show had it in spades. I dug the album for sure but the feeling in the room was unexpected and as the band definitely brought it that night, the crowd returned ‘it’ back in kind.

I arrived at Brillobox from a fantastic Black Dub gig at Diesel (the very last rock show there methinks???) and was expecting a lot from the gals and guy. As they were taking the stage near midnight, my buddy bought me a beer for my B-Day and they absolutely blistered through their opening song, which happened to be the one I wanted to hear above everything else from the album. Amazingly, things only went up from there. You could tell the band were genuinely loving the vibe. Such a great night! It’s so awesome to have the band’s drummer (and sole dude!) Linwood Regensburg participate in this edition of First/Last. 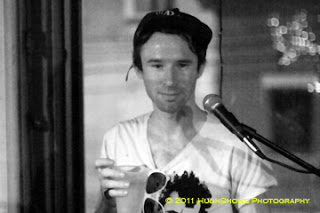 Michael Jackson’s Thriller, from a Bradleys. If you can remember what those were.

Gaye Blades self titled, The Champ by the Mohawks. Oh, and Hard Beat by AKA, very cool 70s psych prog group from Indonesia.

This question is so lame. It’s like admitting to the world who your favorite aunt is. My mom’s an only child which leaves me with one on my dads side, but if you had six aunts, the other five would be pretty upset to find out they didn’t make the cut. That being said, I will include The Idiot by Iggy Pop, Pet Sounds by The Beach Boys, Plastic Ono Band by John Lennon, Velvet Underground self titled, Sticky Fingers by Da Stones, Like A Motherfucker (LAMF) by Johnny Thunders and the Heartbreakers as six of my favorite aunts.

So I wanted Beach Boys Party. Couldn’t find it used so I bough it new on CD. Brought it home, opened it up only to find ‘Friends/20-20’ inside. Well I was bummed but very soon found big love for those albums. So much so I went and found ‘Friends’ on vinyl. Opened the sleeve when I got home only to find ‘Best of the Hollies’ inside! What does this strange run of events mean?????? While I’m on the subject, Wouldn’t Be Nice-My Own Story by Brian Wilson (though it is rumored to have been written by his therapist Eugene Landy) is quite a read. Go for it.

The Lemonheads at the Flood Zone in Richmond, Va. I had the chance to meet Evan Dando in Melbourne, and of course tell him this story and how it changed my life and all that and I wanted to be in a band because of that show, which was partially true. He was scheduled to play directly after us, but to no ones surprise, was AWOL. Months later, luck shone my way and our new lawyer turned out to be John Strohm, ex-guitarist for the Lemonheads!

BirdCloud, Denney and the Jets and Ranch Ghost at the 5 spot in Nashville.

When I was a teenager I went to WHFstival in DC. I really wanted to see Run DMC. A bunch of crap alternarock bands were on the bill too which meant I got to witness the mighty Limp Bizkit. Fred Durst kept calling Bill Clinton a pussy and ranted about how no one needs a “fucking leader”, and then instructed 60 thousand people to start a water bottle riot. Possibly the most retarded thing I’ve ever seen.

Our last gig at the Brillo Box was fantastic. Hellions were on the loose for sure. Maybe the best night of our then tour with Natural Child. The next morning we ate at the Quiet Storm and picked up a paperback copy of Maltese Falcon for the road. Great time indeed.

Thank so much for a great birthday presen Linwood. Please come back to Pittsburgh. We’ll show you more love than ever brother!