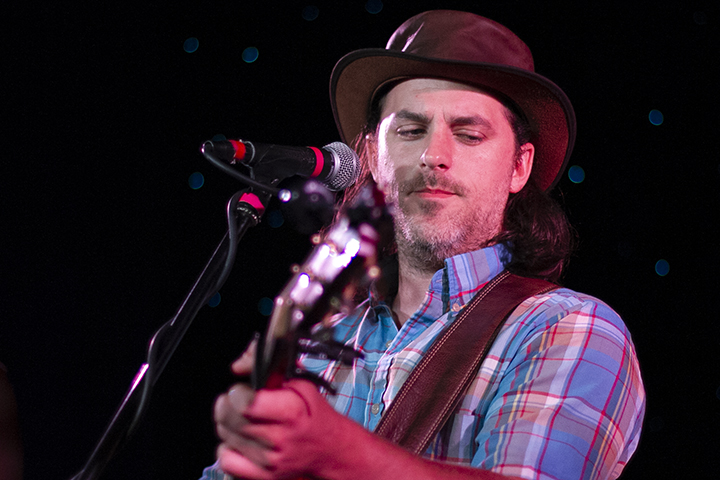 Chris Hannigan is an indie folk singer-songwriter who is currently just beginning to produce his next album. A regular fixture at Acousticafe at The Funhouse at Mr. Smalls on Monday nights where I met him recently, Chris has a few gigs lined up later next month. I want to thank Chris for taking the time to participate in this edition of First/Last.

The first album you ever bought?
August and Everything After from Counting Crows. I got it on CD through Columbia House’s old scam-deal back in the 90’s, where you could get 12 CD’s for a penny or something like that. I remember tearing open the packaging, enjoying the handwritten lyrics on the disc, and listening to the album all the way through. My brother and I really loved “Omaha,” which we played on repeat and which I still think is a great song. And then there was the Saul Bellow-inspired “Rain King” and of course their beloved, overplayed radio hits from that record, “Round Here” and “Mr. Jones.” Adam Duritz is some kinda genius. Poetic, cathartic, and dynamic rock n’ roll.

Your last album bought?
Recently I picked up Ruston Kelly’s Dying Star. Highly recommended. I’ve also been enjoying the Cordova’s That Santa Fe Channeland the Brandi Carlile’s The Firewatcher’s Daughter. I have a thing for ATO records. Oh, also Jackson Emmer’s Jukebox. We did some cowriting this year, and I appreciate his humor, voice, and sensibilities.

Favorite album of all time?
It’s hard to pick a favorite. I like Dylan’s Self Portrait. Deja Vu by CSNY. Revolver by the Beatles. The self-titled red album by the Cordovas. And Jude’s No One is Really Beautiful. Lastly I’m listening to Floyd’s Wish You Were Here right now, and that has to be in my top ten of all time. And Joni Mitchell’s Blue. I could go on and on…

Least favorite/most disappointing album?
Speaking of ATO, I remember being disappointed by Dave Matthews Band and their Stand Up record. In hindsight, I can definitely appreciate it more and really like the cover art.

First concert attended?
I’m reaching here, but I think it was Goldfinger at Club Laga back in the 90’s. It was awesome. Also bands from my high school used to play at the old Melrose Hall on Babcock Boulevard. The first time I crowd surfed was during a performance of “Pawn Shop” by Sublime. Good times.

Last concert?
Because I play most weekends, I don’t get to catch a lot of live music. That said I opened for Josh Rouse a little while ago and he put on a great show.

Favorite concert ever?
There are two that really stand out. The Cordovas at Americana Fest in Nashville was soul-shaking. I’d played with those guys five years ago, so I knew a bunch of the songs inside and out, but they had evolved so much and brought so much life and energy to that show. I was just floored. They brought out Daniel Danato (the telecaster-wielding cosmic country rising star) for a jam. It was transcendent. The other was seeing Ben Harper and Dave Matthews at Three Rivers Stadium before it was demolished. Rain, fireworks, and lots of dancing in our seats.

Favorite thoughts, experiences about Pittsburgh?
You know, Pittsburgh is a diamond in the rough. I love the Arts Fest, libraries, the Carnegie Art Museum, kayaking and fishing on the rivers (especially at night), and going out foraging and hiking in the wilderness in and around Pittsburgh. I enjoyed living in California in my twenties, but Pittsburgh will always be my home.

Thanks, Chris. Looking forward to the new record. Your songs at Acousticafe were so good, man.