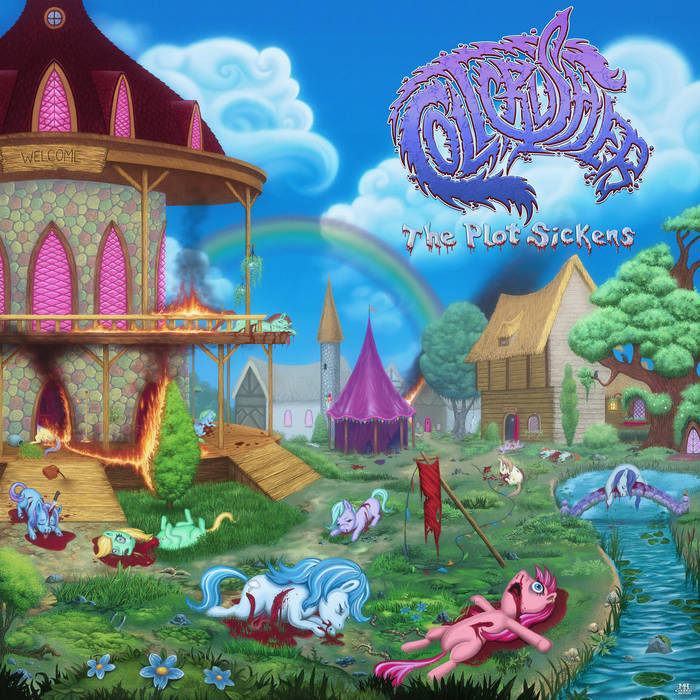 “With ever-present murderous expressions on their faces, they regale with tales of brutal annihilation of the innocent residents of the greater Ponyville region. Your ears will be smashed, your heart will swell to the bursting point, and all of your preconceived notions of music will be shattered into jimmy-shaped shards of hatred so putrid that even Pinkie Pie won’t be able to enjoy them atop a delicious cupcake.“

Coltcrusher is Pittsburgh,  based ‘ponycore’ band that is actually one person creating all the music. With a My Little Pony’s Equestria theme, Coltcrusher has a punishing death core metal sound that you can experience on their latest release, The Plot Sickens. Way cool that all proceeds from all sales go directly to women’s shelters. I want to thank Brootaloo (Guitar/Bass/Drum Programming/Vocals) for participating in this edition First/Last.

The first album you ever bought?
It was probably a ‘Weird Al’ tape, Alapalooza. I don’t know exactly how I got into him when I was young but I thought he was the best. My opinion of him has actually only gotten better over the years. Writing parodies is not easy and his original songs are amazing as well. I ended up owning all of his albums eventually. I loved music before I got into ‘Weird Al’ but my older brother and parents had just about everything I’d want to listen to covered (Faith No More, Queen, Jesus Christ Superstar, Michael Jackson, Pearl Jam, and on and on), so I didn’t have to buy anything until I found something I HAD to have until I found ‘Weird Al’, which had not yet found its way into their collections. I probably bought it from Walmart or NRM, ha-ha.

Your last album bought?
Doctor Octoroc – In the RPA2 Over the Sea. I love this guy. He makes really awesome themed chiptune albums, including 8 Bit Jesus (NES Christmas covers each in the style of a particular game), and After These Messages which was all TV theme songs and jingles. The album I just bought from him is a chiptune recreation of Neutral Milk Hotel’s classic In the Aeroplane Over the Sea. Super awesome album! He does really cool things with chiptune that you don’t hear a lot of other places.

Favorite album of all time?
Smashing Pumpkins – Mellon Collie and the Infinite Sadness. It wasn’t always my favorite favorite but it’s very nearly the prefect ideal for an album in my eyes. Varied, sprawling, surprising… AND it’s just packed with bangers and classics left and right. I never understood the criticism of it having too much filler because I don’t think there’s ANY filler. A total homerun.

Least favorite/most disappointing album?
I have never been more disappointed by an album than St. Anger. It’s not my least favorite album, but I think it was a real wake up call to me at the time that expectations and reality could be so diametrically opposed. I WORSHIPPED Metallica when that album came out. I felt like I needed to branch out and find more music to listen to.

First concert attended?
Metallica! Star Lake, 1998. I was 12 and had no idea what I was in for. Loved every second of it, especially as it started to rain during the tail end of the set, including my favorite song at the time, “One.”

Last concert?
GWAR! It was in December of last year in Cleveland. I never miss a Gwar tour. When Dave Brockie died, I finally felt for the first time how people seem to feel when celebrities, musicians, artists, etc. die. I have so much respect for what he built, how he performed (best metal frontman of all time!), and the body of work he put together with Gwar. Their live show still absolutely rips even in his absence. Hail, Oderus!

Favorite concert ever?
This is tough. I’ve been to 350+. A few come to mind. Protomen at Altar Bar in 2012. Anamanaguchi at Garfield Artworks in 2012. Babymetal at the Hammerstein Ballroom in NYC in 2014. But the best is probably any time Daikaiju is in town. They’re an instrumental surf rock band that is constantly touring. They wear masks. They do not wear shirts. They usually play Howlers but I saw them for the first time in a kitchen in South Oakland. Their live show is nearly indescribable. You’ve never seen anything even remotely like it. Do yourself a favor and listen to their tunes and check them out the next time they come through. Go into the live show without doing any reading up on or watching it and just let it happen.

Least favorite concert?
I drove out to Lancaster with a friend to see Streetlight Manifesto at the Chameleon Club. This was our first time seeing them (on their supposed farewell tour no less) so we were stoked. But we got there a little late and were stuck way, way in the back. We could barely see the feet of everyone on stage. And we were so far away that the people around us were louder than the band. It was a great crowd and probably a great show but not for us. We might as well have not even been there. I’ve seen them many times since then and they’re truly incredible live, so it sucks that they’re my least favorite concert memory.

Favorite thoughts, experiences about Pittsburgh?
I love Pittsburgh. It’s got just about everything you could want. The people here are honest and proud of the city. There’s always someone doing something awesome just beneath the surface.

Thanks, Brootaloo. My least fave concert was The Band in 1994 at Metropol. We were stuck in the back and couldn’t hear a thing except the people around us complaining about the terrible sound.