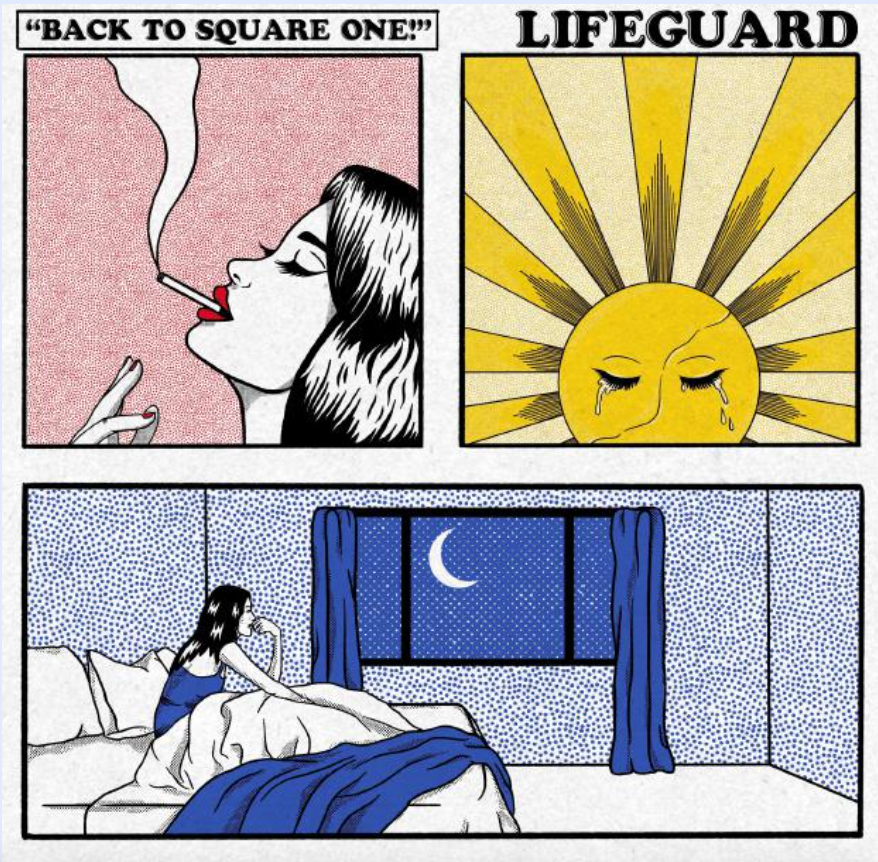 “If you go running, I’ll go chasing I’m not looking back ’cause giving up was so much worse than taking one step back it’s better off we take a chance than leave our hearts intact“

Lifeguard is a fun-loving, high-energy, and emotionally-driven Pop/Rock band based in Pittsburgh, Pennsylvania. The band derives influence by artists such as Death Cab For Cutie, Joy Division , The Killers, and others in a wide spectrum of genres. Combining Elijah Bill’s (Drums/Percussion/Synth/Background Vocals) fast-paced and dancey drums with Jake Faigen’s (Guitar/Bass/Lead Vocals) heartfelt chord progressions, infectious guitar riffs, melodic bass lines, and personal lyrics, Lifeguard cultivates a sound that easily gets fans hearts’ racing, feet moving, and minds thinking! Formed in June of 2020, Elijah and Jake spent months writing and rehearsing to record their debut EP: Back to Square One. Given the circumstances of the COVID-19 pandemic, they decided to write and record as a two- piece, handling multiple duties in-studio. They are currently seeking members to fill positions for live performances. With two singles released from the 3 song EP, the remaining tune drops next week on 8/27. I want to thank Jake and Elijah for taking the time to participate in this edition of First/Last.

The first album you ever bought?
Jake Faigen: If we’re counting Who Let The Dogs Out by The Baha Men, then that. But if not, then Any Given Thursday which is an early John Mayer live album. I don’t listen to John Mayer anymore but I do like his songs from that album a lot in a guilty pleasure kind of a way.
Elijah Bill: Toxicity – System of a Down.

Your last album bought?
Jake: I guess this question makes me realize how much I stream music now because I don’t even really remember the last album that I downloaded. Lately, I’ve been streaming Faye Webster’s album I Know I’m Funny Haha. They are super groovy and chill, and Faye Webster’s voice is so nice.
Elijah: 6 Sounds for 6/6 – deleTR

Favorite album of all time?
Jake: That’s a tough question, I feel like my musical taste is always kind of changing with my mood but I think a good pick would be Emergency & I by The Dismemberment Plan. The music hits a lot of different points and keeps it very interesting, while exploring a lot of different emotions. I really appreciate how simple, yet relatable the lyrics are and can always help a twenty-something year old who’s feeling alone to know someone else feels the same way.
Elijah: I don’t think I have one sole favorite album – I like too much music, my listening mood changes so often.

Least favorite/most disappointing album?
Jake: For some reason, I just got into Third Eye Blind’s first album for the first time recently. It smacks, every song is a banger. But I was sad, because I’m not into any of their music after that album.
Elijah: Least favorite is also hard, I often revisit things and end up liking them a lot more later on.

First concert attended?
Jake: My first concert set a pretty high bar for me and is probably still my favorite concert that I’ve been to. The Flaming Lips performed in Pittsburgh about ten years ago, and my friends and I were able to get pretty close to the front row. The show started out with Wayne Coyne coming up from underneath the stage and it looked like he was being born from a psychedelic vagina projected on a screen behind him. A human-sized hamster ball proceeded to inflate around him, and then he crowd surfed on us. Those guys know how to put on a weird concert for sure.
Elijah: Breaking Benjamin, Three Days Grace, and Nickelback…hell, yeah!

Last concert?
Jake: I saw MGMT perform a year or two ago, and they killed it.
Elijah: Touché Amoré at the Rex Theater… (RIP).

Favorite concert ever?
Elijah: I’ve been to a lot of shows big and small. In recent memory, though, Tool with Killing Joke has been my favorite.

Least favorite concert?
Jake: I would probably say Matt & Kim at Bonnaroo a few years ago. I was coming up on acid, and I just remember that the drummer was playing off time and they were smiling really wide in this way that was bugging me out a ton, and I had to squeeze my way out through this huge crowd. It was stressful.
Elijah: Fall Out Boy in 2013, Save Rock n Roll comeback – awful live sound and absolutely no energy at the venue that day. Huge disappointment.

Favorite thoughts, experiences about Pittsburgh?
Jake: It sounds corny, but I honestly do think Pittsburgh is a magical place with magical people. I’ve been lucky to have made some great memories adventuring around Pittsburgh’s parks and forests with some great people. And have been fortunate to get to know and spend time growing alongside some of the most talented people that I know.
Elijah: Pittsburgh reminds me of my Aunt Aimee. She showed me every inch of the city and was one of the most influential people in my life, so I think about her when I think about Pittsburgh.

Thanks both. I am so loving this music and hope you can rustle up some musicians to be able to play it out live!