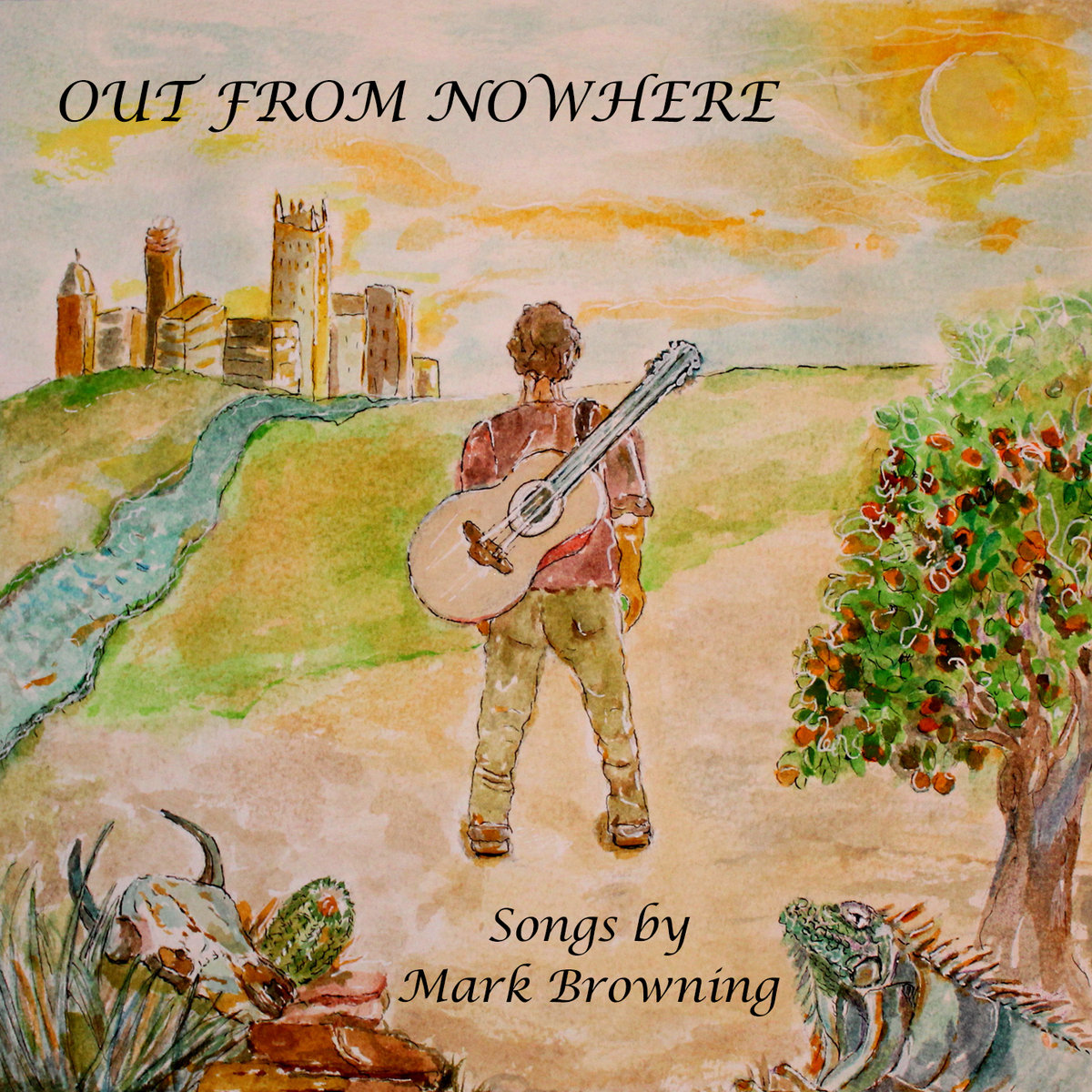 “Born into a military family, I have traveled all my life. Must have gotten into my blood. Never cared much for routine. I started out in biology, collecting reptiles for zoos and museums, but then traveled. Pruned apple trees in NY, farmed wheat in WA, painted houses in Key West, drove truck in NYC, published articles in magazines, hiked the Amazon and Andes… writing songs the whole time.“

Mark Browning is a folk rock singer-songwriter who has been kicking around the Pittsburgh music scene for decades, most notably as a member of the band Sandoz who I used to see regularly in the late 80’s and early 90’s. As a solo artist, Mark has just released a fantastic collection of songs Out From Nowhere. Mark explains, “The concept of an album called Out From Nowhere came as I was living in the Sierra Nevada foothills and traveling the country in a trailer in various picturesque places, without a television, and often alone.” You can check him out as he will have his CD release show on August 24 in the Southside later this month. I want to thank Mark for taking the time to participate in this edition of First/Last.

The first album you ever bought?
The first album I bought (after I became musically aware, so Herb Alpert doesn’t count) was most likely the Black Album by Chicago. A great album, far different from later work they did which was increasingly commercial.

Your last album bought?
Bruce Cockburn, Speechless. I lent it to someone and didn’t get it back. Worth a second buy without a doubt.

Favorite album of all time?
Oh man! How about if I name five and if you need to have one you can erase the rest?
1. Infidels, Dylan. 2. Blue, Joni Mitchell. 3. The Heart of Saturday Night, Tom Waits, 4. Jackson Browne (Self-titled), 5. Harvest Moon, Neil Young.

First concert attended?
Paul Simon, Syria Mosque, back before Garfunkel. Simon was playing with his brother–also a great guitarist.

Favorite concert ever?
Bob Dylan at the Benedum. It was his Slow Train Comin’ tour and believe me the whole place danced all night long. He made it fun that night.

Least favorite concert?
Bob Dylan at IUP. Oh my, he didn’t care what he sounded like. Just a bunch of his better known stuff all played and spit out the same.

Favorite thoughts, experiences about Pittsburgh?
Pittsburgh… I was a military brat so we traveled the world but we always came back here and it was always so unique… back then it was the steel mills making the sky glow red at night and Forbes Field and the crack of the bat and roar of the crowd, the winding streets and long bridges, the smell of the city like iron ore after a rain, the locusts singing, the rivers never ending. Today, I live on a hill high above town, and it is the sight of the city skyline wherever I go, and the sounds of trains hooting at the crossroads, and even better the long deep soft roars of tug boats at night. That is Pittsburgh to me.

Thanks, Mark. So nice to bump into you the other night. Probably the first time we talked face to face in over 30 years. Serendipity.