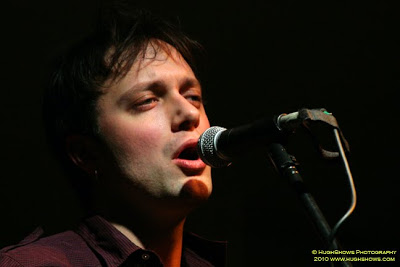 I realize it’s not Friday but in honor of Aaron’s upcoming European itinerary and his show at the Thunderbird tomorrow June 9th, I have decided to post his responses in this special edition of First/Last.

I had a bunch of dubbed stuff, but probably the first I actually bought was a cassette called “Dancing Feet” by Scottish folk group The Tannahill Weavers. Either that or Capercaillie. I wasn’t really into pop music, except for listening to my mom’s Moody Blues and Beach Boys LPs.

A limited-edition LP by UK duo Smoke Fairies, “Ghosts: A Compilation of A-Sides, B-Sides and an EP from the Recent Past.” I saw them play at the Warhol recently, opening for Laura Marling, and was quite smitten.

I’ve never been able to narrow it down like that — I probably have 100 favorite albums of all time, none of which I could live without.

Really, anything by Nirvana. I discovered them at exactly the right age, at the right time, and my other tastes in music then pointed clearly toward Nirvana becoming THE band of my teens. But I just couldn’t get into it, and not for lack of trying. Even now, I’ll listen about half-way through an album, and get bored. I recognize there’s something powerful there, but it’s just lost on me.

Again, probably folk concerts, early on. First rock concert was Bob Dylan at Hill Auditorium in Ann Arbor, Michigan. I had no idea what was happening.

The Twilight Sad and Mono recently at Brillobox. Stunning sets by both.

Possibly the Flaming Lips at an outdoor pavilion in downtown Cleveland. But how do you compare that to, say, Nick Cave and Grinderman in Gothenberg, or seeing The Locust in a disgusting Michigan basement? They’re all my favorite ever.

It may have involved a local band and “The Jam on Walnut.” But it’s impossible to say — there’s always a new low out there …

For years, my existence in Pittsburgh was primarily nocturnal — playing shows, going to shows, hanging out in dive bars and at house parties — and I started to burn out. Lately, I’ve been seeing new sides of Pittsburgh, often from a bicycle, and by daylight. It’s made me appreciate the whole city a bit more, and given me more energy for what I do here.

Thanks Aaron and good luck on the overseas tour