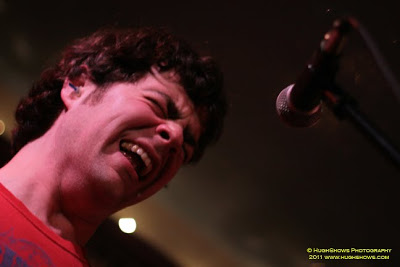 When I finally caught this band a couple months ago, I was blown away by how good they were. They have been around the local scene for awhile now and I criminally haven’t seen them play since that last and only time. That changes this Saturday where they play a bill with School of Athens and Thee Audience at Howlers. Hopefully the guys found their merch bin and will have some music for sale this time…in any case, I am grateful that guitarist Adam took a little time out to play this week’s edition of First/Last Friday.

I think Pittsburgh has some tremendously talented musicians and bands, and I’ve always hoped that it would gain some sort of national recognition as having a vibrant music scene ( a la Austin, Portland, Omaha etc ). There’s definitely a sort of evolution happening with places like Brillobox and other Lawrenceville venues popping up in the last few years and I’m happy that Triggers have been able to be a part of that. Pittsburgh is great as it is now, and I believe it’s only going to continue to grow and flourish as a center for music (and the arts in general).

Thanks Adam. Teenage Mutant Ninja Turtles soundtrack! Since I’ve been doing these, that might be the best answer I’ve heard yet! See ya Saturday.