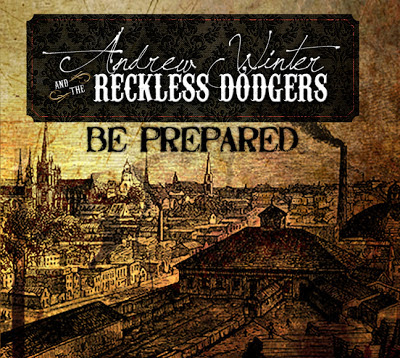 “Andrew “Stripes” Winter reclaims the reigns of mountain-punk troubadour for the debut of his solo project, Andrew Winter and the Reckless Dodgers. Fresh off the heels of the European and Russian leg of the “Return to the Living” farewell tour for the iconic horror punk band, Blitzkid, Winter is focusing on the band’s first release Be Prepared coming out via his brand new co-owned label, Ahoy Hoy! Records, on January 22, 2013. For his freshman release, Winter retreats from his more notable horror punk persona after having spent the better part of the last decade touring with other giants of the genre, including Gorgeous Frankenstein (featuring The Misfits’ Doyle Von Frankenstein & bodybuilder Gorgeous George), Face to Face, and Strungout. Drawing upon the many influences and experiences he has encountered along the way, Winter exhibits truly expert musicianship through the melding of various genres and themes throughout his writing and execution. As AD Amorosi, a renown music journalist and Philadelphia native, reports, “the whole shebang sounds like a sweet blend of the Avett Bros and Green Day. If you haven’t heard of them yet, you will.”

Check out the band’s official Website, Facebook, BandCamp, ReverbNation, SoundCloud, YouTube and Twitter. They stop in Pittsburgh tomorrow at Evolver on their ‘Anchors Away’ Tour celebrating the debut release of “Be Prepared” on the band’s own Ahoy Hoy! Records. My thanks to Andrew ‘Stripes’ Winter (Lead Vocals/Guitar) himself for taking a few to participate in this edition of First/Last.

Thanks, Andrew. I love the tag ‘Mountain Punk’! Fits your music so well.