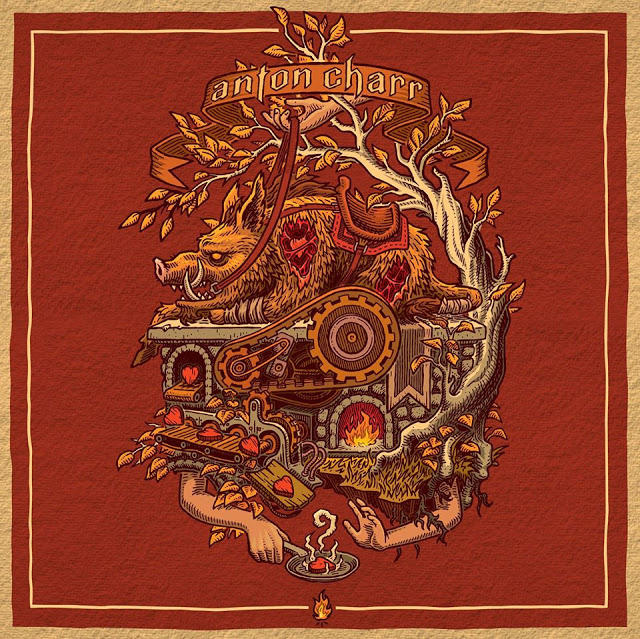 “I was just feeling like putting out more music more often so I figured going solo on the side was the best way to do it.”

Anton Charr is the stage name of musician Antony Chirovsky who is digitally releasing his debut album Whole Soul Furnace via First Flight Records before heading off to London with a cool show this Saturday (1/2) at Brew on Broadway in Beechview. Much thanks to Anton for taking the time to participate in this edition of First/Last.

Shadows Collide with People by John Frusciante. I had quite a few albums before that which my mother owned and I listened to frequently. Everything from Chicago and the Beatles to Carly Simon and Fine Young Cannibals and Cat Stevens. In many ways it was my appreciation for Cat Stevens that began my first forays into owning my own music and John Frusciante was the one. Especially at that period of his music (before he was always a bit too strung out and now he is in a new electronic and Acid-Rock phase) his vocal quality reminded me of Cat Stevens and his musical ability, while always obviously present in the Red Hot Chili Peppers, was really on display for that record and it was just awesome. “Omission” is still one of my favorite songs and I may or may not judge a potential collaborator on whether they know it or might want to sing it with me.

The Long Goodbye by John Paul White.I had always really liked The Civil Wars and since they split up I was looking for something in the same vein. I found his solo album from before they got together. I’m still spending time with it so my opinion is not the best informed. He displays the same lyrical maturity that made the group as good as it was but I think the restrictions of an acoustic duo really let the beauty shine and this record sometimes sounds a little over-instrumentalised. Still really good.

I always seem to have a new “favorite record ever” every week. But one I keep coming back to is John Mayer’s Born and Raised. It was so stripped down and honest compared with his earlier work but also has this elegance of style and word-play that makes it a pleasure to listen to. He also likes to wear his influences on his sleeve and that’s a trait I really appreciate. It is why I also like Muse and Dawes and Frusciante. I like the idea of music as history and that history is nowhere more accessible than when you can trace the influences. Like John Mayer’s blues playing shows influences of Albert King because Mayer was influenced by SRV who was influenced by King. I like that.

El Camino by The Black Keys While it is definitely hopping record and a great one to go for a run with, after the
musical depth and beauty of Brothers, it was rather disappointing, made more so by my perception of their live performances as getting poorer on the following tour.

The first concert/gig was a local Pittsburgh high school band with some friends of mine, Hot Metal Bridge at the Rex. Just some good Rolling Stones covers and lame bandannas and pleather jackets and fun times. Full out touring national act wise, it was The Black Keys show I’ll talk about later.

I’ve been out of the country and busy with school so there haven’t been a lot of chances recently. The last big-time show was probably John Mayer right after Paradise Valley came out. I also saw local artist Zach Hudson in a show a while back as well. I have seen a few stand-up specials filmed for BBC 3 this past year. No music yet though.

Los Lonely Boys at the Pittsburgh Blues Festival at Hartwood Acres a few years back. Best live performance, including YouTube videos, that I’ve ever seen. I think it was their last stop of that tour and they just went all out. It was great.

When the Black Keys were in Pittsburgh during the El Camino tour, as you may have guessed from my least favorite album. It was so short, only like 55 minutes with the encore, and all the songs were played at what seemed like double time. It just felt as though the band did not want to be there and I could tell.

There’s so much about this city to love. The music scene is one of the greatest parts. All of the great people I’ve had a chance to listen to and work with. Adam Levine of Circles and Squares, Jeremy Caywood, Zach Hudson, Jeff Betten, Andre Costello…. Pittsburgh is also the only city I can really call home. I’ve lived in many places along the Eastern Time Zone and I’ve spent time in Europe and the UK but Pittsburgh is home. It has an international feel to it thanks to the many cultures from a history of immigrants. It is also extremely walk-able (at least if you’re OK with hills) and the public transport, while not the best, has a certain charm. I love it here.

Thanks, Anton. Looking forward to hearing the album. Also, safe travels to London, my man!