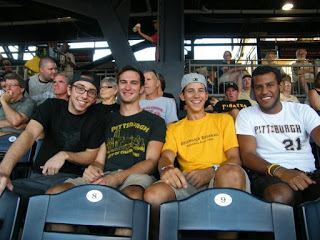 “The Beauregards formed in late 2009 after the indefinite hiatus of their former band. Beginning as a trio with Tim Korenich on vocals, guitar, and bass; Josh Hischar on lead guitar, bass, and other instruments; and Evan Bellan on drums, the band looked to break into the indie music scene. In 2011, the band welcomed Chris Trepagnier to take over on bass, allowing the band to progress further musically. The band released its first EP (Good Try) this past year, which is available on Bandcamp, Amazon.com, iTunes, and CDBaby. The Beauregards are looking forward to a busy summer of shows on the East Coast.”

The proudly Pittsburgh band is playing tonight at Smalls supporting Band of Skulls. My thanks to the boys for taking some time to participate in this edition of First/Last.

Thanks, fellas. Have fun tonight. After the gig go grab a Primanti’s, BITCH!