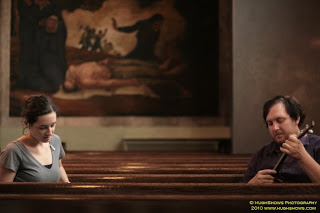 Action Camp are a local duo who bring together a variety of influences and styles to produce what they themselves call ‘melodramatic popular song’. They headline tonight’s late show at Club Cafe with Chupacabra and Una De Luna. As for for the image above, they are participating in a cool and unique project that I will profile soon and you can read about here. In the meantime, Maura and Bengt were cool enough to participate in this edition of First/Last.

Bengt: Probably Michael Jackson’s Dangerous on cassette, but my sister and I used to run around the living room blasting our parents’ LPs of Thriller and Black Sabbath’s Paranoid so I had a pretty polarized taste in music from a very young age.

Maura: I honestly probably didn’t buy music until high school; I recorded onto tape a ton of my dad’s collection and listened to my mom’s records. The first tapes I ever commandeered, though, were probably B-52’s Cosmic Thing and U2’s Achtung Baby.

Bengt: Elsinore – Yes Yes Yes. We did a mini-tour with them earlier this year and they are fantastic in so many ways.

Thanks guys. I am really excited about the upcoming Vanka project. Those murals are just so powerful. Can’t wait to hear what you come up with.