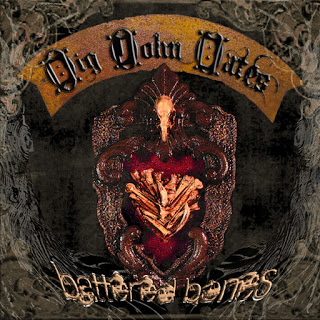 “Keep the liquor within arm’s reach cause Big John Bates is on a world tour with their new album Battered Bones (Rookie Records). The new band shakes the ghosts out of the woodwork and Bates shares vocal duties with Montana upright bassist Brandy Bones. Her lyrics are passionate tales of small town sins and her soulful screams combine with guitarist Bates’ growl and dark philosophies. Add tuba, accordion, cello & doom-wop piano and you find a sound that ‘is like being serenaded with a rusty hammer’.”

Playing this Sunday at Belvie’s ‘Ultra Dive’ with Slim Cessna, I want to thank Big John Bates himself for taking the time to participate in this edition of First/Last.

Thanks, Bates. Sounds like a perfect bill on Sunday.