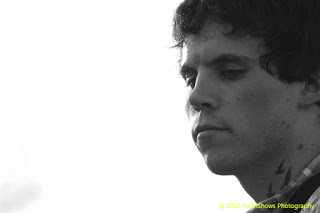 “As an artist matures so should their creative expression. “It’s merely a reflection of that, an open-documentation of ephemeral states of mind and the inevitability of change.” There bloomed with a new set of songs, and a new set of feelings, Bluebird Midwest. Self-described as, “A necessary reaction to the way I’ve been feeling, and the past few years of my life.” Singer-songwriter Roger Harvey explains, “I’m learning to accept things that are mine and mine alone; giving up on pointing the finger elsewhere. I’ve spent a lifetime running. I’m ready to close that chapter.” While the subject matters are traditionally dark, this is not a testament of seeking solace in such feelings. “I want people to listen and know that it’s alright to be truthful with the people you love, and that it’s OK to be honest with yourself.” While his voice might be shaky and soft spoken, the message is very simple. Bluebird Midwest is a celebration of the intangible, the inevitable, and the resolutions. The new album is just the vehicle.”

Hailing from Pittsburgh, Roger brings his folk tunes to Club Cafe this Wednesday on a bill with Samantha Crain and William Elliott Whitmore. My thanks to him for participating in this edition of First/Last.

Operation Ivy’s “Energy”. I remember doing chores around the house and beggin’ my mom to take me to the local record shop to get it. She caved. I played that album til’ it wouldn’t play any longer.

Ruby Fray’s “Pith”. They just played up the street and are total sweethearts.

Neil Young’s “Harvest”. This record is perfect. “Sweetheart of the Rodeo” is up there. My response would most certainly be different every time you asked me. I mean, “Blood on the Tracks”? There are a lot of records out there.

It was a local music showcase at the Erie Art Annex in ’95 or ’96. It was an annual Halloween show slash costume contest. I was 10 years old and I remember my friend Marc had just bleached out my hair. I probably looked ridiculous. I remember anticipating the show a couple weeks ahead of time, I had just discovered punk rock and there was only a show once in a blue moon near the town I grew up in. I don’t remember anything in particular about the show but I have kept going, 16 years later. That must mean something.

When I was 16 I played a show in a small town in New Mexico. If you’ve spent time in the American Southwest you probably know that it can be incredibly desolate and in some areas pretty rough. I remember pulling in down a dark street and being greeted by kids pouring out of an abandon church. One of the kid’s dad had set up the show and showed us in saying “We don’t get many bands coming through here, thank you guys…” He then told us to get all our valuables out of the van explaining that it wasn’t safe to go out on the street on our own and so for the most part we stayed inside the small fractured church taken over by southwestern punk rockers. I remember this incredible energy in the room there when we played and it was the first time I had really felt that. When I think back on that show and the conversations I had with the kids there, I feel clarified about building a life in the arts. Music can change lives, and if we can all contribute even a little bit, we become pretty empowered. The best shows are the ones that can be appreciated without pretension where there is no clear divide between the audience and the bands. I think we all felt very lucky that night in the middle of nowhere way out in New Mexico.

I think I’ve burnt all those memories out. I feel like even the most tense shows have still turned out to be memorable for one reason or another. I love watching bands play. I love to travel around and play shows. I try to keep on the sunny side. Always.

Growing up playing music in Pittsburgh has been truly amazing. Skipping town for as long as I have has granted me a lot of perspective on our community. Pittsburgh is truly individual in its nature. So kind, so inclusive, so humble. There is an ethic in the arts here of hard-work and cooperation that is not easily found in other cities. It is so important for us to keep our community all inclusive and to pride ourselves in the community of the arts in Pittsburgh as a whole. Never stop sharing with each other and to never take what we have for granted. I worry that as our city grows and diversifies we’ll lose some of the ethics that we built our community upon. Let’s stick together, let’s be friends always, and let’s continue to share what we got.

Thanks, Roger. I must say, very well put, buddy!