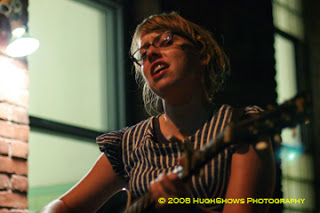 I have been going to Boca Chica shows for several years now and through the dozens of incarnations the band takes on, there is always one constant, singer-songwriter Hallie Pritts. She is celebrating the band’s latest release ‘Get Out of Sin City’ tomorrow, Friday, November 18 with a show at Brillobox. Along for support are friends Donora and The Slow Reel. It’s a 9:30 doors and 10:00 p.m. start and you know the drill, this show will probably be a sell-out so plan accordingly. There is a mess of press today about the band here, here, and here. With all that is going on, Hallie was cool enough to take some time and participate in this edition of First/Last.
The first album you ever bought?
No Rain by Blind Mellon.
Your last album bought?
Loretta Lynn All Time Greatest Hits.
Favorite album of all time?
It changes…  I get stuck on albums all the time… like, right now, I’m
listening to the eponymous Aztec Two Step album, which a not terribly
well-known folk rock band from the 1970s. I got the record at The Exchange when
I was about 16 years old because I liked the cover. And it remains the best album
that I bought on a whim. It’s really light folk rock, but I love it. I also
love Time (The Revelator) by Gillian Welch. To say that an album “changed
your life” is kinda lame, but I think it’s true of this one. What else?
Harvest, of course. Also, I’m really into the live Neil Young/Crazy Horse
album, Weld.
Least favorite/most disappointing
album?
You know, I don’t even know my own self anymore. I’ve always hated Bob Seger. Just
couldn’t handle it at all. He was my standby for Music I Don’t Like. But
recently, whenever Night Moves comes on the radio… I find myself thinking that
he really can’t be denied. What is happening to me?
First concert attended?
I went to a lot of big concerts with my parents when I was a little kid, but
the first concert I went to of my own volition was the Gin Blossoms, Spin
Doctors, and Cracker. I begged my Dad to take me. The first concert I went to
with my buddies was a They Might Be Giants show at Metropol. I was 15.
Last concert?
I just got back from seeing a million nameless, amazing bands in New Orleans… hit up every
venue on Frenchman Street.
Favorite concert ever?
Ah… I think this would have to be the Midnight Jam at Merlefest in North Carolina. I went
to that festival for about 5 years running. They do this “Midnight
Jam” on Saturday night and tickets are expensive, so only old people buy
them, but then they get too tired to go, so if you stand outside and look sad,
usually someone will just give you a ticket. It’s amazing– all the best
musicians from the festival get together in a small auditorium and just jam for
hours… well, the best part of that night, the part where I think I actually
cried was a slow, slow, sad, sad rendition of “Girls Just Wanna Have
Fun”, headed up by Gillian Welch and David Rawlings, supported by members
of Nickel Creek, and, inexplicably, John Paul Jones. I was exhausted and sleep
drunk and it may have been the best moment of my life.
Least favorite concert?
Oh geez… all the ones I didn’t go to. I think the most disappointing time was
when I sauntered up to Club Cafe and Andrew Bird was standing outside and I
almost passed out. And then the show was sold out. Alas.

Favorite thoughts, experiences about Pittsburgh?
Seeing Josh Verbanets play one of his first shows with The You at the BBT.
Also, opening for the Avett Brothers at a sold out show at Club Cafe.
Thanks a lot Hallie. You have definitely been on my wish list to take the questionnaire for awhile now. Can’t wait to hear the new disc! Oh yeah, probably see you at Bob Seger on Saturday then?