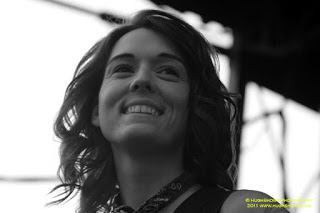 “If you start a band with me, I’ll get us signed and on the road within a year”…… Not only did the determined, confident and tenacious 22-year-old Brandi Carlile come through with her promise to twin bothers and initially reluctant band members Phil and Tim Hanseroth, but she also exceeded their expectations. Carlile landed the prophesied record deal with Columbia Records one year later and with the guidance of producer Rick Rubin, they recorded and released their eponymous debut album in early 2005. “The Twins were local heroes to me, I used to go and watch them play live when they were in The Fighting Machinists, I thought they were cool but more importantly great singers and songwriters.” Carlile, in a vain attempt to impress her newfound comrades, ordered in some dry ice to lure them to their first band rehearsal. “I didn’t know how dangerous overexposure to carbon dioxide could be, so I ended up nearly killing us all from asphyxiation!” Near-death experiences aside, this was the beginning of a unique collaboration. It was a partnership that would see Brandi Carlile and
Tim and Phil Hanseroth sharing everything from the stage, songwriting and production credits and all creative business decisions, to bunk beds, road pranks, swine flu, confined spaces and dirty t-shirts too.”

As mentioned yesterday, Brandi is performing this upcoming Monday in Munhall. My thanks to her for participating in this edition of First/Last.

Thanks, Brandi. I am sure there are a bunch of people who would love to have the opportunity to dispute your mot disappointed album claim…