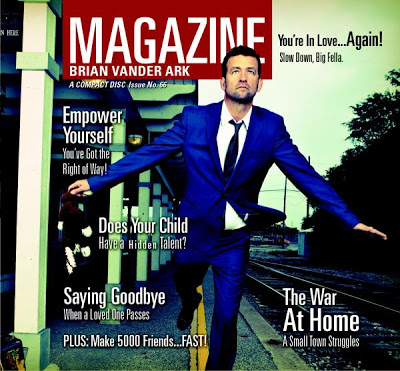 “Massive success and its aftermath have sent many artists into oblivion, forever trying to recapture the moment when the world ﬁrst bowed at their feet. That moment came for Brian Vander Ark when, as the lead singer and principal songwriter for The Verve Pipe, he sold more than 3 million albums worldwide and produced a string of hit singles, including the #1 song “The Freshmen.”
More than just the frontman, Vander Ark was its literal and ﬁgurative voice, providing the creative spark and writing songs that gave the band its devoted following. Although the songs were cast in the style of the era, they remain singular and special. His gift is one of tremendous storytelling clarity expressed through melodies and rhythms that are unique, riveting, intensely personal and entirely gripping.”

You can find Brian at his official Website, Facebook and Twitter. He returns to Pittsburgh tomorrow night with support from Wojo, touring behind his 2011 album, “Magazine“. I have to thank him for taking a few minutes to participate in this edition of First/Last.

Thanks, Brian. It’s cool that some artists have an affinity to certain venues in a particular city. Like a home away from home in the the crazy business of music.