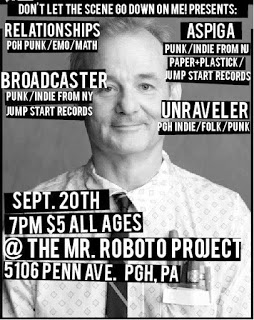 Broadcaster are 3-piece rock band from long Island, NY. They recently released a 7″ on Jumpstart Records called ‘Tightrope Walker‘ and are playing Roboto tomorrow night with Relationships, Aspiga and Unraveler. My appreciation to drummer Anthony Vito for taking a few minutes to participate in this edition of First/Last.

Thanks, Anthony. It still amazes me how many times Guns ‘N Roses are mentioned in these Q&A’s and almost always in the ‘disappointed’ category.