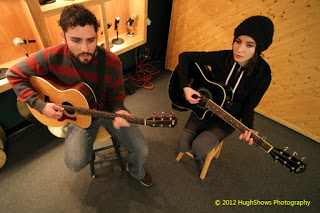 “Morgan Erina & Guy Russo began writing and performing together as Broken Fences in 2010, and have developed a sound that suggests a meeting between Bon Iver and Simon & Garfunkel. They’ve taken their two vastly different worldviews (She’s from NYC, he’s from Pittsburgh, PA), and melded them into an honest and powerful style of indie-folk, one that’s as current as it is timeless.”

The band is releasing it’s debut album this week at an already sold out show. These two are truly in the DIY category of musicians and I dig them for that. Thanks to both Morgan and Guy for taking a few minutes to participate in this edition of First/Last.

Thanks you two. Looking forward to the set!