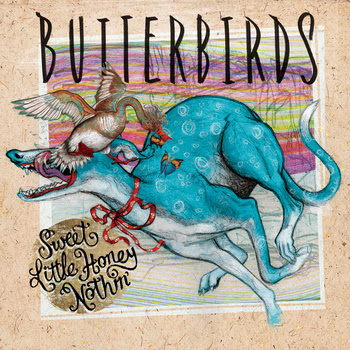 “Butterbirds churn out squawky, demented, friend jams from Pittsburgh, PA.” Check out the band on Facebook, Twitter and BandCamp. The ‘Acid Country/Demented Hug Rock’ band recently released it’s debut “Sweet Little Honey Nothin’” joining a slew of totally kick-ass young bands coming out of the Pittsburgh ‘underground’ scene. There is some killer music happening right here in town, people. Go out and support it! I want to thank John Kraemer (Guitar/Vocals) for taking the time to participate in this edition of First/Last.

I’m almost positive the first CD I bought was Marcy Playground’s ‘Sex and Candy’, but it was definitely only the single. The first album I bought must have been “Magic” by Distorted Penguins. Don’t all early highschoolers fall into ska/pop/punk?

I just got cbend’s “RuSHRuSHRush”. Cbend is from Alabama, but has been in Pittsburgh long enough to definitely be considered local. She writes these songs that tear you apart and mash you back together with little reverence for where your pieces used to go. Little stops and starts and drastic volume and tempo changes keep it really intimate and immediate. It’s phenomenal. Check it out. Oh, she’s also one of my very best buds.

How about… Daniel Johnston’s “Songs of Pain”. There’s just so so much something in there. It’s got tragedy and judgment day stuff and comedy and little candid home recordings of family and friends. He’s got feelings and convictions man and each one gets about 2 minutes set to these classic piano pop songs. He’s super honest and gives it all to ya. I’m really into albums for great songs and this has a ton of funny, clever, hurtful gems. Plus it’s a 20 track debut basement recording. Yeah that’s a lot.

After having put so much effort into our own release, I’m trying harder to avoid bashing stuff people put their all into. I mean we really labored on “Sweet Little Honey Nothin’” and I am sure that a lot of people who hear it are going to hate it. It makes me anxious to think that someone could be hearing it now. Ah. Internet. Having said that, Aerosmith’s “Just Push Play” is a real stinker. One of those records that makes you ashamed to play guitar and sing. Helped ruin ‘Armageddon’, and I am positive they would not care if I didn’t like their jams.

House show in Garfield at 12/27/2013 at my buds’ house with Sam Rockwell Machete Champion, Buck, Cbend, and Laura Lee. Lots of friends and great songs. I also may have played a couple songs.

My Dad and I saw Violent Femmes play at Club Laga on 11/8/2003. It was one of those shows where little was expected. They were older guys singing a lot of songs about teenagers’ emotional and social issues, but they ruled. They played stuff from all over their catalog and were wild and unhinged. No frills no flare, just awesome songs played fast and raw. Plus, I think they actually had fun or at least I perceived it that way.

A handful of years ago I saw Black Lips play at Mr. Smalls. I always liked their music, but I was really there for the debauchery and insanity their shows had become famous for. Everybody stayed fully clothed and they got through the set without incident. Maybe not my least favorite, but definitely disappointing. I guess it was actually a good show I had just built it up too much.

I love Pittsburgh. I grew up here, went to school here, and chose to stay. There are always new bands to hear and places to see them whether in basements, bars, galleries, or whatever. Beer is usually cheap and encouraged. I’ll probably die here. Hopefully not right away.

Thanks, John. Love what you guys are doing. Can’t wait to see you play live, man. Thanks for the cbend heads up as well. So much good stuff out there in Pittsburgh now.