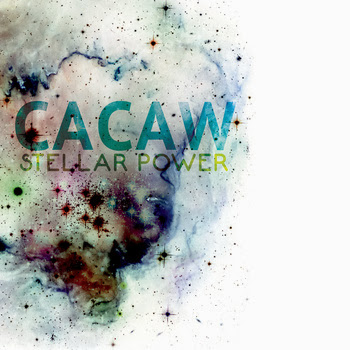 “When musicologists of the future look back to find the missing link between the avant-jazz and synth rock of the early 21st century and the hybrid sounds that have yet to reach our contemporary ears, the formation of the futurist jazz trio CACAW may represent a key point on that evolutionary timeline. With music inspired by the love between robots, the swallowing of one star by another, and elements in a state of change, the band’s 2013 debut CD, Stellar Power, is an album driven by transition, whether in the music or in the cosmos.”

Check out the band at their official Website, Facebook, Twitter, SoundCloud, Tumblr, Vimeo, Instagram, YouTube and BandCamp. The band hits Pittsburgh this Sunday night at the Thunderbird Cafe on their ‘Midwest Record Release Tour‘ for their latest album “Stellar Power” with support from locals Napoleon in Exile. I want to thank Landon Knoblock (Keys) for taking the time to participate in this edition of First/Last.

Thanks, Landon. I too listened to a ton of Floyd growing up. Easily destroying several cassette copies of “The Wall” and “The Final Cut” from overuse.