First/Last-Calum MacConnell of Man Your Horse 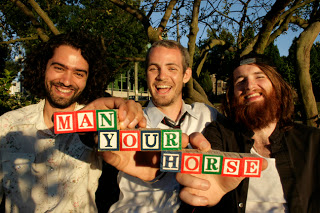 Man Your Horse are a self described “experimental, math rock, afro-beat trio ” hailing from up north in Vancouver, BC. They have just released a new EP called Shorts and are in the midst of a major North American tour to support it. They are super cool guys and roll through Pittsburgh tomorrow playing a their high energy set at the Moose for a no cover show.. Bassist Calum MacConnell was nice enough to participate in this midweek edition of First/Last.

Thanks Calum. Man, that tour itinerary is massive! Good luck on the road and be safe my brother.