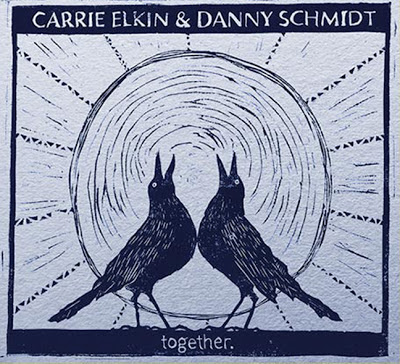 “It’s a special treat when Danny Schmidt and Carrie Elkin, who normally tour separately and solo, get to share the stage together. If the chemistry seems especially sparkful, they come by it honestly, as they are a rare breed: a romantic partnership in real life, not just musical life. And the two together on stage makes for a classic case of the whole being greater than the sum of its parts.

Danny Schmidt is best known for his riveting poetic lyrics, which have drawn favorable comparisons to Leonard Cohen and Townes Van Zandt for their depth and complexity. And gypsy spirit Carrie Elkin is best known for her incredibly soulful and dynamic vocals, which have drawn favorable comparisons to Patty Griffin at her most powerful, and Nanci Griffith at her most intimate.

Together, the respective strengths they each bring, individually, merge into a much greater whole . . . a performance of great energy and spirit . . . and one that audiences seem to be able to connect with on a multitude of levels, at once: Emotionally, Spiritually, and Intellectually.”

Check out Carrie at here official Website, Facebook, MySpace, Twitter and her blog. Danny can be found at his official Website, Facebook, Twitter and Tumblr. The two songwriters/lovebirds join forces for their current tour and stop in Pittsburgh tomorrow night at Club Cafe with special guest local troubadour Tom Breiding. I want to thank them for taking a few minutes to participate in this edition of First/Last.

Carrie Elkin: Well, I can’t technically say I bought this album. I asked for it for Christmas when I was eight. Ozzy Osbourne’s “Blizzard of Ozz”. I loved that album. I still love that album. I actually have a photo of me wearing a Care Bear night gown holding the album up high above my head. I’m fairly certain my dad didn’t realize what he bought at the time, cause there’s tiny little me, holding an album with Ozzy Osbourne wearing a cape, looking demonic and holding a cross. Nice.

Danny Schmidt: Jimi Hendrix’s “Are You Experienced”. I fell in love with his playing and his energy after watching ‘Live At Monterey Pop’ when I was about 14 or 15.

Carrie: Bruce Springsteen’s “Wrecking Ball”. Not in love with it so much.

Danny: “In the Aeroplane Over The Sea” by Neutral Milk Hotel . . .to replace an old lost copy. Love that record . . .and it disappeared in my consciousness for a long time, until I recently saw Jeff Mangum live . . .and that reawakened it. Great record.

Carrie: I suppose in recent years, it’s that “Wrecking Ball” album. I had high expectations.

Danny: Honestly, I have no idea. I don’t really remember records that I don’t connect with. I just move on.

Danny: I’ve seen a hundred of my friends’ concerts over the last year. The last big concert I went to was probably the Leonard Cohen show in Austin, kicking off his latest tour.

Carrie: This is such a tough question for me. hmmmm…..tough because most of my friends play music and each and every time I hear them play, I think, man, that was the best concert I’ve ever seen. But, if I must choose….my favorite “famous person” concert was Ray Lamontagne….for the simplicity of it. There was nothing flashy at all. Just him, singing like he does, which in my opinion is one of the most beautiful things I’ve ever heard. My favorite “not super famous person” concert was Steve Poltz last year at SXSW. He’s brilliant and feel good and hilarious and so present with the audience. I’ve not seen another performer like him.

Danny: Jane’s Addiction in Austin in 1990. They left a lot of minds blown. Mine one of them.

Carrie: I hate to say this, but Bob Dylan about eight years ago. It was my dream to see him and it was so terrible. ugh.

Carrie: I’ve actually not played in Pittsburgh before, but have certainly spent time there, as my whole family is from western PA. I DID get my nose pierced there once when visiting my college roommate. I like Pittsburgh. I grew up in Cleveland and there’s just something special and romantic about the Midwest cities. I hope folks will make it out to the show. I’ve heard wonderful things about Club Cafe.

Danny: Sadly, I’ve only been to Pittsburgh once before. I had a great time, met a wonderful inviting community of folks . . .but barely got to explore the city at all. Hopefully we’ll get to spend more time this go round. Never liked Bradshaw much . . .but whatever, there’s a lot of water under that bridge.

Thanks, Carrie and Danny. I guess congratulations are in order. I can safely assume there are plenty more collaborations in the future.