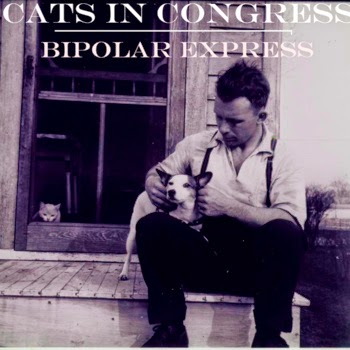 “We play what feels right to us.“ Cats in Congress are an indie-grunge band from Johnstown, PA. Their debut full-length, “Bipolar Express” dropped last year and you can catch them out playing live gigs around the area. I want to thank Billy Lewis (Guitar/Vocals) for taking the time to participate in this edition of First/Last.

My parents had bought me a ton of albums growing up and music had always been a huge part of my life. I think the first album I ever bought with my own money would be “Favourite Worst Nightmare” by the Arctic Monkeys when it came out.

The last album you bought?

The last album I went out and physically bought would have to be “You’re Gonna Miss It All” by Modern Baseball, an amazing Pennsylvania band who I (along with the rest of the band) would love to play with at some point.

I’m going to have to cheat on this question and give two albums, “Hypnotize” and “Mesmerize” by System of a Down. They’re meant to be played together as one long concept album. The guitar work of Daron Malakian is the whole reason I decided to become a musician in the first place. Also I can play every song on both albums on guitar.

My biggest disappointment of an album would be Fall Out Boy’s album “Save Rock And Roll”. While I do enjoy the album, I was extremely disappointed that they completely removed themselves from their punk rock roots.

The first concert I attended was a Kansas/Styx concert in my hometown of Johnstown.

I try to attend as many local shows as humanly possible, but the last professional concert I had attended would be a Reel Big Fish concert.

The favorite concert I’ve ever been to would probably be when I saw System of a Down after they (finally) got back together. Their showmanship is absolutely legendary.

The worst band I’ve seen play is Mumford and Sons. Their live show was absolutely atrocious and they sounded like absolutely garbage. It was most likely just an off night but that night has stuck with me.

My favorite thing about playing in Pittsburgh would be all the amazing people we’ve got to meet playing all our different shows. Between the promoters, fans, and other bands, we’ve made some lifelong friends in the last year.

Thanks, Billy. Yeah, I really don’t get the Mumford & Sons thing. They are alright I guess but their enormous popularity I will never understand.