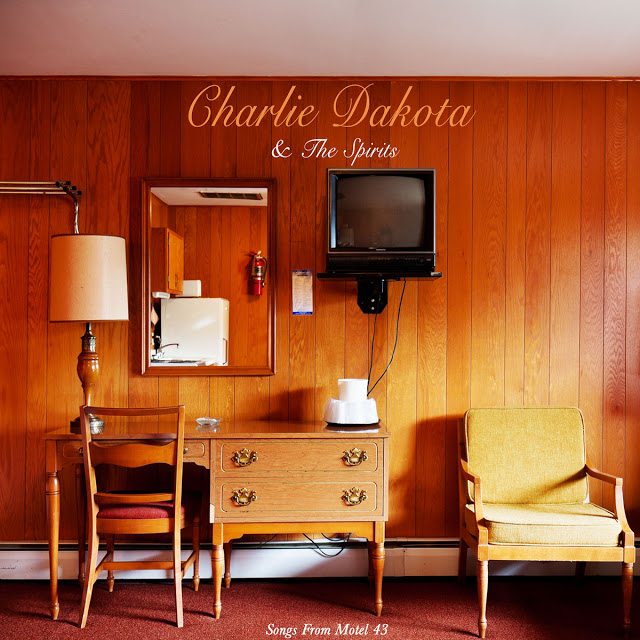 “Residing somewhere between Field Report and War on Drugs is Charlie Dakota & The Spirits. Awash in synths and pedal steel, the Mississippi quartet is in no hurry on the pensive “Glow,” the last song on their just-released Songs from Motel 43, indicative of the melancholy and spartan arrangements that inhabit the album.” – Bucket Full of Nails

Charlie Dakota & The Spirits is an ‘alt-country shoegaze’ band (there’s a genre you don’t see everyday) from Mississippi who’s independent debut release “Songs From Motel 43” dropped last week. The ‘band’ is songwriter Knowlton Bourne who handles most of the production and instrumentation. I want to thank Knowlton for taking the time to participate in this edition of First/Last.

This might be a little embarrassing but the first album I remember buying with my own money was “Stunt” by Barenaked Ladies. ‘One Week’ was a damn hit.

The last album I bought was by and band from Philly called Hop Along. The album is called “Painted Shut.” It’s a really incredible album from start to finish. Wonderful lyrics, the production is top notch. It’s definitely one of my favorite albums of the year.

Ooh that’s a hard one. Damn. I’d have to do it by genre or something. I grew up with my Dad playing “The Joshua Tree” all the time, so that album definitely hits home. “In Rainbows” is something I could listen to day in and out, the production on that album is unmatched. But I also love the self-titled Townes Van Zandt record. Those are some phenomenal stories set to great country music. I love that album.

This is also hard. I feel like I’ve probably shelved/forgotten it due to the fact that it was disappointing. Maybe “Stunt” by Barenaked Ladies.

I think I saw Collective Soul with my parents when I was super young. But the first concert I remember seeing and loving was U2 on the ‘Elevation Tour’. That was big for me.

I saw Beck last weekend in Memphis. That was great. He is still having a lot of fun playing music. I really dug that.

I saw Dirty Projectors at the House of Blues in New Orleans a couple of years back. They put on a hell of a show. Harmonies out the wazoo. I also saw Mastodon with some friends in college. That was pretty wild.

Probably some festival show where dehydration, drugs, heat exhaustion and claustrophobia all culminate in a crowd of thousands of people, but even those experiences are fun in their own right.

I have never been, unfortunately. But I imagine a lot steel, metal and friendly faces. I’d love to make it up that way soon.

Thanks, Knowlton. LOVE the record! Would love to see you play here, man. Let’s make it happen.