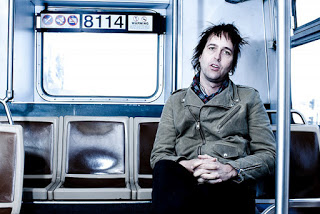 “With “his triple-threat ability—excellent songwriter, killer lead guitarist, charismatic frontman”—(AOL Spinner), California native and longtime San Francisco resident singer-songwriter Chuck Prophet pays homage to the city he calls home for his twelfth studio album, Temple Beautiful. Set for February 7, 2012 release on Yep Roc Records, the album is named for the ill-fated club of the same name, “Temple Beautiful is a long closed punk rock club located in the old Reverend Jim Jones’ People’s Temple. Where I saw my first gigs,” says Prophet, who co-produced the album with Brad Jones. “This record was made in San Francisco, by San Franciscans about San Francisco.”

Prophet brings the “Temple Beautiful” tour to Pittsburgh this Friday for an ‘Evening with…’ show that begins at 9. Chuck was nice enough to take a few minutes to participate in this edition of First/Last.

Thanks Chuck. I never realized how many times you played here?