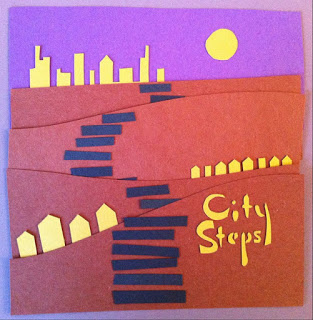 “City Steps is a group who plays pop songs. Originally formed as a vehicle for the songwriting of Michael Lawton, the group came into their own when Lawton met up with likeminded musicians Bill McAdams (guitar/production), Kate Daly (bass) and Joe Tarowsky (drums). Their songs are influenced by and evocative of 1960’s jangle pop, folk, surf and garage pop, and 1980’s Postcard/C86 style British indiepop, filtered through a blurry lens of modern urban ennui. Currently hard at work on their debut LP (which will be available on vinyl in early 2013 via McAdams’ Teen Regime imprint), they’ve recently made two of the album’s songs available as a preview on their Bandcamp site.”

You can find the Pittsburgh band on FaceBook and BandCamp. My thanks to frontman Michael Lawton and guitarist Bill McAdams for taking the time to participate in this edition of First/Last.

Michael Lawton: I had a lot of cassettes as a kid, but I don’t really remember most of them or how I acquired them. I know the ‘Kokomo’-era Beach Boys and some Motown stuff was in there. The first CD I ever bought was “It Takes a Nation of Millions to Hold Us Back” by Public Enemy. I bought it at NRM with my Christmas money.

Bill McAdams: The Beach Boys, “Little Deuce Coupe”. Bought it for my dad’s birthday and ending up keeping it for myself. This was the first album I really remember obsessing over and I’m still obsessed with it!

Michael: I recently had a pretty good haul at Rather Ripped in Lawrenceville, which included The Style Council’s “Café Bleu”, Dory Previn’s “Mythical Kings and Iguanas”, Aztec Camera’s “High Land, Hard Rain”, Donovan’s “Greatest Hits”, “The Best of The Lovin’ Spoonful”, “The Three O’Clock” and “A Christmas Gift for You from Phil Spector”.

Michael: “Pet Sounds”. For as long as I can remember.

Michael: There are loads, but I try to block them from my consciousness. If I gave mental space to all of the things I don’t like there wouldn’t be room for much else.

Bill: The Beach Boys “S/T” (1985). Probably the single worst album I own from one of my favorite groups.

Michael: Pavement, Come and Dirty Three at Graffiti. I was a pretty big Pavement fan as a teen, and I’ll still pull out “Crooked Rain, Crooked Rain” once every few years if I’m feeling a particular kind of nostalgia.

Michael: I think it was the WYEP Holiday Hootenany. Seeing our friends Neighbours do ‘All I Want for Christmas is You’ with Joy Ike on vocals and Derek White on sleigh bells and tambourine was brilliant.

Michael: Probably Brian Wilson at the Carnegie Music Hall of Homestead a few years back. Being in the same room as Brian kind of gave me chills. Plus, my friend Adam (who was the first City Steps drummer) and I didn’t have cash for the bar, so we snuck sips of whiskey from a brown bag in his car during intermission. Because we’re classy.

Bill: Bob Dylan. Hard to pick a single show but Conneaut Lake Park in 1992 and Cleveland, OH in 2011 are two real standouts.

Michael: Pretty much everything I attended as a teen, after that Pavement show. Lots of really dreadful punk bands.

Bill: The Band circa 1990’s at Metropol. They were sloppy, uninspired and (to paraphrase the Woody Allen joke) they only played for 45 minutes.

Michael: Pittsburgh and I have had a pretty conflicted relationship over the years, but we’ve made our peace. We have so much fantastic music and art and culture here, and I feel like that’s really blossomed over the past ten years or so.

Bill: I love Pittsburgh. The city is always changing. There’s never a lack of shows to see. Our symphony is great, and we have two of my favorite contemporary bands, The Cynics and Raw Blow.

Thanks, Michael. Those two songs are a tease, man. Can’t wait for the LP! And Bill, I can attest to both The Band Metropol and Dylan Conneaut shows. Incredibly awful and fantastic, respectively.