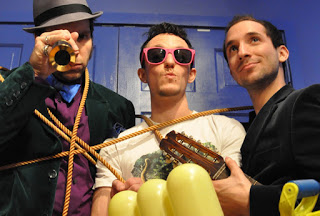 “Cobalt & the Hired Guns is about love and guts, energy and enthusiasm – refusing to pretend they aren’t having fun. Friends since they were just little buckaroos, the boys of Cobalt & the Hired Guns have always aspired to create an album to match their rambunctious live shows. It’s finally here! Their new record, Everybody Wins!, aims for the rafters with a cherry bomb explosion of poppy punk, barroom ballads, power pop, Ska, horny rock and good humor. Following up 2008’s Jump the Fence – their first Carbon Neutral album- Everybody Wins! continues the tradition of the band’s commitment to art and environmentalism- and includes their fullest lineup of 20 different players (not all at the same time).”

The band stop in Pittsburgh this evening playing a cool venue to see a band and knock down some pins, Arsenal Lanes. Always a good time. My thanks to hometown boy Mike Roth (Vocals, Bass, Guitar) for taking a few minutes from the road to participate in this edition of First/Last.

First album you ever bought?

At NRM with the 2/$20 deal, so it was either Weezer “Blue Album” or New Kids on the Block’s “Hangin’ Tough” cassette.

The new Fiona Apple record. Just saw her at the Chicago Theater and the show was such a great combination of terrifying, sexual, and rocking the F out. I was blown away, one of the Top 5 shows of my life.

Maroon 5, “Overexposed”. I saw them open for Guster at the I.C. Light Amphitheater and it was one of the best shows of my life. They played their whole CD, “Songs about Jane”, plus the song ‘Wasted Years’ which didn’t show up on a record until “Overexposed”. It seems like they give their old fans a couple tunes to hang onto from the glory days on each record. I’ve been disappointed with their stuff since ‘Songs about Jane’ though.

It was the B94 Summer Stretch concert ’96 or ’97 at Starlake Amphiteater. I was in 8th grade. I was a double headlining bill of Sugar Ray and Smash Mouth and I believe Christina Aguilera and Destiny’s Child opened. Unfortunately, Smash Mouth’s singer was sick that day, so they played a short set and came back a few months later and did a free show. But I was really there to see Sugar Ray. People don’t give them enough credit for rocking the F out…’cuz that’s how they started.

Company of Thieves and Band Called Catch at Hard Rock, Chicago. COT is awesome. Their lead singer is incredible. She has such a unique, powerful, versatile voice. I’m surprised they’re not more well-known than they are right now.

Two way tie. I went to three sold-out Dispatch reunion concerts at Madison Square Garden when they were raising money for nonprofits in Zimbabwe. Dispatch gave all the ticket revenue from those shows and went to folks in Zimbabwe. Very cool. I also worked show production and got to see Paul McCartney at Wrigley Field from twelve rows back. Getting to see an original member of The Beatles play a bunch of his old material was unbelievable.

I’m gonna’ go with my least favorite HALF of a concert when I saw Black Angels open for The Black Keys at the Agora Theater in Cleveland. Black Angels are a droney mess of a band and their set was terrible. I don’t know how they played Lollapalooza this year. The Black Keys were awesome though. Every one of their shows I’ve seen has been incredible. I saw them in the basement of our student union in college (Oberlin, OH), and at the Lime Spider in Akron, OH. It’s the size of three hot, sweaty living rooms, which is the best way to see The Black Keys.

I’ll leave you with a list……….. Season tickets to the Steelers I love the Clarks Mountain biking in Frick Park Seeing the Buzz Poets in Club Laga I once went swimming in Monongahela River Hines Ward Heinz Ketchup The Clark I grew up in Point Breeze Mario Lemieux Eatin’ nachos n’at Cowher Power When it’s slippy aht’, yinz better bring your galoshes Poundin’ Irons ina parkin’ lot of the Clarks concert Where I grew up My family Seein’ the Clarks at IC Light Amphitheatre The Buccos Hills n’at

Thanks, Mike. Nice list. BTW-Did’ya ever hear of The Clarks? 😉