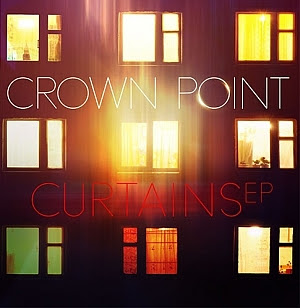 “Portland, Oregon-based danceable alt/rock band Crown Point, fronted by vocalist/guitarist Jon Davidson and guitarist/vocalist Russell Stafford, and rounded out by bassist Peter Arvidson and drummer Kaycee Kay, is pleased to announce the release of a new EP, Curtains. A seven-song collection of melodic, lyrically-driven rock songs with heart, the band easily maneuvers between danceable hooks and sonic layering on its latest offering. Taking its name from the album’s opening track, “Curtains Drawn,” a highly energetic, melodic rock song, a la Muse, Curtains chronicles the metaphorical curtains that so often stay closed on people’s lives, keeping them entrenched in darkness, fear, and apathy.”

Check out the band at their official Website, Facebook, Twitter, Vimeo, MySpace and YouTube. They have recently released their latest EP, “Curtains“, and I want to thank Russell Stafford (Guitar/Vocals) for taking a few to participate in this edition of First/Last.

The first album I officially every bought that I will admit to is Van Halen, “Balance”. I have a slight recollection of a New Kids On The Block cassette tape before that, but my memory has changed that from my poor choice, to my brothers.

The last album I bought was 2000 copies of Crown Point, “Curtains” EP. But prior to that, the new Mumford and Sons. Such an amazing album. I love when a band can release a follow up and not only make it just as good, but better…and longer! That’s a really hard feat for a sophomore album. I also have the Macklemore & Ryan Lewis album in my shopping cart as we speak. Keepin’ it real in the NW!

I was just thinking about this the other day actually. I would have to say that it’s Foo Fighters, “The Color & The Shape”. It was such a leap forward for rock music in the mid 90’s. I remember buying it at the shop near my parent’s house and borrowing my dad’s Discman (the kids won’t get that), then sitting down on a bench at the shops just listening to it. I must have listened to it 5 times before I went home. It blew my mind. And it’s one of those albums that is still relevant, what, almost 15 years later?

“Van Halen III”. What the hell was that about. Gary Cherone…dude. No. Just, no.

I was spoiled for my first concert. Rolling Stones, ‘Voodoo Lounge’ tour in 1994 (?). My parents are huge Stones fans and they wanted me to follow in their rock steps. It was pretty mind blowing for a 13 year old kid. I remember the stage had a massive steel python head that blew fire across the stage. I mean, come on…a fire breathing snake.

Oh, wow. The shows all seem to run together lately. Outside of some local shows and such, I guess the last show I went to was Go Radio. We were actually playing the show, but I got there with the plan to actually stay and watch their set because I love their new album very much.

Muse back in 2004. It was right when they were starting to get some good airplay in the states, but certainly weren’t “big” here yet. They were HUGE in the UK at that time though, so they had this massive stage show they used in arenas and such, but crammed it all into the Bossanova Ballroom in Portland. I mean, it was HUGE! The whole experience of an arena show for, maybe, 400 people…at a rundown ballroom…in Portland. It absolutely blew my mind.

Oh man…here I go again. Van Halen on their Gary Cherone tour (sorry, Gary). It was just weird. The best part of that show is when Gary, in a purple velour jumpsuit, tried to climb up the second tier at the Sydney Entertainment Center and fell down on his butt. Can you imagine anything being more embarrassing than that?

Thanks, Russ. Damn, Gary Cherone has really scarred you, huh? It’s safe to say you are not alone.