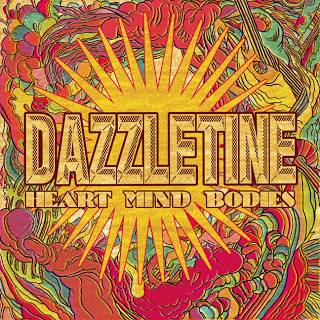 “Several years ago I met two people who swore that they heard us before. I was like, “No way, you weren’t even born!” and they said, “No, I MADE you!” Sounded a little strange and I looked at the guy/girl with his hat backwards like he was crazy. But, no sir. He wasn’t crazy. He was Right. He took us, the band was with me then, to a factory in the middle of our city where they made memories long forgotten or just remembered and took us to his boss. I introduced myself, “Hi, I’m Dan Ko…” “Dazzletine! I knew you would dress like this! Sit down”. Stunned, I asked, “Hey, you do’ya know me and my name ain’t Dazzletine or what ever its Dan Ko…” Again I was interrupted, started to get me a little m… “I laugh at your statement, child. You are a child. That is for sure. We are all children. Look at this city. Look at my hands” They were covered in some kinda dust, weird. “This is from rock. From rocking. You see? We all need Volume, child. We need light and sound! Here Come The Babes!” Whoa, what, yeah, seriously. “You ain’t no street skipper or back breaker or note taker or soup stirrer or snake charmer or farmer or baker or maker or shaker you are DAZZLETINE! You are Dazzletine” The factory workers all stopped doing whatever it was they were doin before and looked at me with their sooty faces and started in, “You are Dazzletine. You are Dazzletine. You are Dazzletine…” Over and over musta been thousands of people chanting now, “You are Dazzletine…” kinda scared but then the place got real bright with colors and the soot turned into things and they grabbed hold of us chanting louder hands covering our faces millions of hands darkness then brightness brightness brightness brightness and the sun and the moon and day and night and happy and sad and sick and healthy and girls and boys and sisters and mothers and fathers and friends and lovers and good and bad and life and death and morning and night and dawn and dusk and twilight and starlight and noon and midnight and teatime. Forever.” This is for YOU. I am another yourself.”

A year ago next week marks the first time I was lucky enough to lay ears and eyes on one of my favorite Pittsburgh bands, the outrageously ‘glamorous’ Dazzletine. If you are unfamiliar with them, check out their debut EP, “Heart, Mind, Bodies” in all it’s bombastic glory! If you need to see them live, as you definitely should, they are playing a ‘house’ gig tomorrow night at The Baum Shelter. This band truly rocks and I want to send out my sincere appreciation to Dan Koshute (Guitar/Vocals) for taking some time to participate in this edition of First/Last.

Thanks, Dan. I have to say, I listen to your album ALL the time and have been an idiot in not seeing you play more often. Will rectify that for sure in the future, buddy!