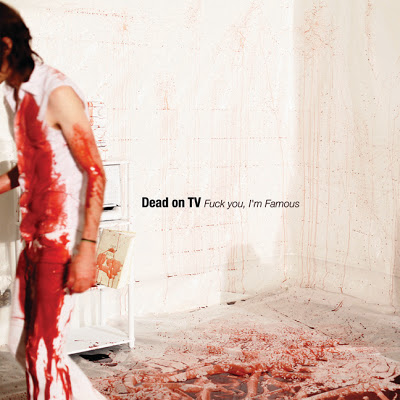 “Dead on TV is a local Chicago band with the heady, thought provoking lyrical style of a young Elton John coupled with the large, tubular and apple-headed cock of Neil Diamond during his Sweet Caroline period before he got strung up on Coke. But with fucking guitars.”

Check out the band at their official Website, Facebook, and Twitter. The band hits GarfArt tomorrow night supporting their latest release, “Fuck You, I’m Famous“, via WTII Records. Also on the bill are Kelda Cassada and TERROR FIRMA SKY. My thanks to Daniel Evans (Guitars/Vocals) for taking the time to participate in this edition of First/Last.

Wow, I wish I could remember. I used to buy a lot of Stones records when I was a kid. Them and Tom Petty were my two first concerts. I have cool parents.

“You’re Nothing” by Iceage. Some of the most real music I’ve heard in awhile. Sounds like Joy Division if they were a hardcore band.

This is another hard one, I could listen to the first Cars record over and over again. Every song on that record was a hit. “Juju” by Siouxsie and the Banshees never gets old either, I always wonder how John McGeoch played guitar like that. “Pink Flag” by Wire is classic too.

The most recent disappointment I had was the Frank Ocean record. ‘Thinkin’ Bout You’ is such an amazing song and I really wanted the whole record to be that good, but for the most part, the whole rest of the record is just them jamming.

I think it was either Tom Petty or The Rolling Stones ‘Voodoo Lounge’ Tour. I remember the Tom Petty concert at the Fillmore in San Francisco was the first time I’d ever smelled pot. I was probably 11 or 12. My parents are awesome and took me to all kinds of shows when I was young. I guess if you wanna’ go way back, my parents took me to see/hear Leon Russell and The Flying Burrito brothers when I was in utero. Does that count?

I do sound in Chicago for a living, so I see at least 3 or 4 shows a week. The last one I saw where I wasn’t playing was Peach Kelli Pop, Summer Girlfriends, and Palmflower. Almost entirely female garage rock bands, they all rocked.

I saw Einsturzende Neubauten in 2001. I think it was in Los Angeles. It was the only concert I’ve ever been to where the crowd was completely silent the entire time because they wanted to hear what was going to happen next. They were playing air compressors and tire irons and huge springs that when struck, made your guts rattle with bass. I also got to see Cro-Mags play at the little club I work at in Chicago a couple years ago called Cobra Lounge. That was insane.

I saw this band called VNV Nation a couple times. Horrible. I’ve never wanted to stab a band so much in my entire life. From the music to the stage banter, the whole thing was awful. And I mix shows with lots of horrible metal bands and band that are just pure noise. They topped all of it. And part that pissed me off most was that each time I saw them, it was nearly sold out. If I had a small thermonuclear device on me at the time, I probably would’ve detonated it.

Thanks, Dan. I never had the opportunity to be in the Pub’s green room and I have to say, I’m O.K. with that.