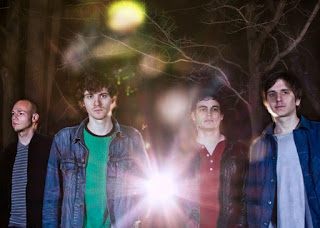 “The Dig’s sound has been developing ever since the band’s two singers Emile Mosseri and David Baldwin started making music together when they were eleven years old. After meeting California native Erick Eiser, the three songwriters have been writing tunes and playing in different bands since they were 16 years old. Anchored by sharp guitars, a woozy synth backdrop and airtight vocal harmonies, the new album Midnight Flowers which is produced by Bryce Goggin (Pavement, The Apples In Stereo, Swans, Antony & The Johnsons) came out on May 29, 2012 on Buffalo Jump Records. It recalls styles ranging from T. Rex to Brian Eno to The Everly Brothers.”

The band rolls into town next Wednesday at GarfArt on a bill with The We Shared Milk and The Dirty Feathers in support of their latest release, “Midnight Flowers“. My thanks to David Baldwin (Guitars, Vocals), Emile Mosseri (Bass, Vocals) and Mark Emiglio (Drums) for taking the time to participate in this edition of First/Last.

Thanks, fellas. Lovin’ the latest album for sure. How two buddies from grade school are still friends and even bandmates is beyond me?