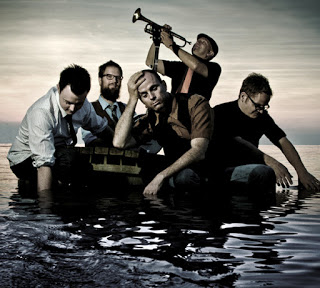 “Brian Buchanan almost died on White Lake. The singer-fiddler-keyboardist for Enter The Haggis went out into the middle of the lake to finish up some lyrics during the recording of the band’s sixth studio album, the aptly named Whitelake, and
tipped the canoe half a kilometer from shore. The ice had melted only a week before, and he was fully clothed and without a life jacket. Remarkably, he managed to swim the canoe to the far side of the lake but faced the added challenge of a three-kilometer walk, shivering through the dark woods on the way back to the band’s cottage / recording studio. “If I’d died, there’s no doubt it would have been called a suicide,” laughs Brian, tentatively. “I had just finished recording the vocals for a song called “The Flood”, which talks about life being out of control and water rising up around you.” Thankfully, the 29-year-old from Guelph, Ontario survived to tell the tale as the band releases its anticipated new album, the follow-up to 2008’s Gutter Anthems, which hit #2 on the iTunes World Music charts.”

The band has been around for what seems to me forever. They return to Pittsburgh for the early show at Club Cafe this Friday with special Guest The Weathered Road. My thanks to frontman Brian Buchanan for participating in this edition of First/Last.

I’m not entirely sure what the first album I purchased with my own money was. To be honest, it was probably a fiddle album, Ed Gyurki or Al Czerny or something. When I developed an interest in popular music, one of my older cousins took me to Sam The Record Man in Toronto and told me to pick out three albums (with the help of his own personal bias, of course). I got “Gish”, by The Smashing Pumpkins; “Aenima”, by Tool and “The Bends” by Radiohead. I guess his advice was worth something, as they’re still three of my absolute favorite albums.

I get a lot of music. I think the last thing I bought on iTunes was an album by a band called First Aid Kit. It’s called “The Lion’s Roar”, and it’s fantastic. I’m also really digging the new album from Of Monsters And Men.

“OK Computer”. There are a dozen others I could say with equal confidence on any given day, but today that’s the one.

Interesting, I’ve never been asked that. I think I’d have to say The Smashing Pumpkins’ last album “Zeitgeist”. It’s sort of a personal grudge though. They were such a huge part of my formative musical years, and they wrote so many amazing songs. I guess I was really hopeful that their first new album in years would be great, and it really isn’t. There’s nothing more frustrating than being disappointed by one of your favorite bands.

Two answers. The first rock concert I attended was Richard Marx. Yes, let that sink in for a minute. My father brought me with him to the Molson Amphitheatre in Toronto. I barely remember it. The first concert that I went to of my own volition was very different, it was a triple bill with Veruca Salt, P.J. Harvey and Live (on their Throwing Copper tour). To this day I remember the feeling of hearing the opening notes of ‘The Dam At Otter Creek’ and getting full-body goosebumps. Every time I step on stage I hope that some moment in our show will do that to someone in the audience.

We played at Merlefest down in North Carolina a couple weeks ago. We only played Friday, but we stuck around to watch some fantastic bands and artists on Saturday, including what may have been Doc Watson’s last live performance before he passed. The highlight of the weekend for me was watching Chris Thile and The Punch Brothers absolutely DESTROY the audience during a blistering hour-long set. It was definitely one of the best live performances I’ve ever seen. To give you some perspective, they followed Bela Fleck and the Flecktones and were followed by Tedeschi/Trucks Band, and I think they blew both acts off the stage. It was humbling.

Wow, that’s really hard. Just a few weeks ago I had the chance to see Hey Rosetta play in a tiny club in Dublin, Ireland. I was sitting in the second row, dead center and about five feet from the stage. That was an incredible show. I’d probably have to say it was Radiohead at Molson Park back in 2000. They were and still are my favorite band, and they were touring “Kid A” and “OK Computer”. They closed with ‘Street Spirit’, and about 25,000 people sang it at the top of their lungs, outdoors on a beautiful June night and I was swaying arm in arm with a girl I’d just started dating and who I was stupidly in love with. That’s pretty hard to beat.

Also a tough one, and again I’m going to give two answers. I saw Billy Corgan’s band Zwan play in Toronto on their only tour, and the sound was so terrible. The bass was literally causing people to puke, and at least one person passed out. I just got so annoyed TRYING to enjoy the show, and the fault lay with the band (the bass player had two 8×10 bass cabinets, and they were firmly at eleven). I’m pretty forgiving, but that was not a pleasant experience at all. My other answer isn’t really a fair one, but it was Creed’s set at Edgefest years ago (north of Toronto). It’s not that they played badly. To their credit, they sounded exactly like Creed…which I guess they have a right to do. The thing is, they followed a Canadian band called The Tea Party, who are so musically complex and adventurous, and they played such a unique and virtuosic set full of Canadian alt/rock staples. I guess the contrast just wasn’t flattering for Creed. I know it’s a little trendy to hate on glory-rock bands like Creed, but I don’t actually hate them. I just didn’t want to see wind machines and pyrotechnics right after a band that didn’t need gimmicks to impress.

I wish I knew Pittsburgh better as a city. I can say that I was pulling for the Penguins both years they made the finals, and we Torontonians love Colby Armstrong (who also played for the Wilkes-Barre Penguins). I’m brushing up on my local dialect, but I think I’m still using y’uns incorrectly. Pennsylvania will always hold a soft spot for us though, as we played our first ever show outside of Canada at the Pennsylvania Renaissance Faire years ago. It’s always a thrill to come back, especially now that we’ve known some of our PA fans for a decade or more! Ok, now I feel really old.

Thanks, Brian. I love how your answers convey the sheer joy and excitement music can have over someone. And never say y’uns…say yinz! Your Pittsburgh cred will go up tenfold.