It’s a simple question. Who is your all time favorite band? For me, it takes me about two seconds to answer Camper Van Beethoven. I grew up with these guys and their musical sensibilities fit my tastes perfectly. I have been lucky enough to see them play four times. The show in 1989 still ranks as my favorite concert out of the thousands I have ever seen. It wasn’t the first time seeing them though. 25 years ago this October, they opened for R.E.M. at the Syria Mosque. They were totally unknown to me that night and my memory is still a bit sketchy, but I vaguely remember them sitting cross-legged on big pillows wearing wizard hats as they played! Don’t ask, I was 19 at the time…let’s leave it at that. You can actually listen to that show here.

The six guys on that stage would eventually help form my musical passions to what they are today. I thought what a better way to celebrate the 100th musician taking part in my little questionnaire than to have my favorite band participate. Even though they are still active (finally bringing their Campout festival to the East Coast for the first time this year…on my birthday no less!), two of them are no longer in the band. I am amazed I was able to track them down. They were extremely cooperative for doing this and I cannot thank them enough. Unfortunately, David Lowery was not able to play along but the guy has enough on his plate with writing, teaching, releasing his fantastic first solo record, and performing in two bands. My immeasurable gratitude goes out to Chris Molla, Victor Krummenacher, Jonathan Segel, Greg Lisher and Chris Pedersen. It means so much to me that you were kind enough to participate in this 100th edition of First/Last Friday. 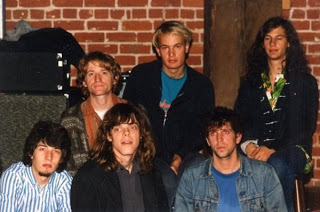 Chris Molla: The first time I spent my own money on records I bought two. One was a Nonesuch recording of concerti grossi for harpsichords and orchestra by J.S.Bach (the old man wrote them to play with his kids). The other was Gustav Leonhardt and Julian Bream doing Bach lute suites. I was really focused on the sound of classical guitar then (I was 13, and had been playing for a couple of years), and had thoroughly absorbed my dad’s Segovia records and every guitar album I could find at the local library, which was how I knew about Bream. Here he was playing the lute. I had also discovered the harpsichord around that time as well and was blown away by that. Here was a record with two, three and four harpsichords sounding at once! It was like a drug.

Greg Lisher: Outside of the family groups at the time ( The Partridge Family, The Jackson 5 ) I think it was the record Still Bill by Bill Withers.

Chris Pederson: Can’t remember the first. I didn’t really buy records as a young child. My parents had a lot of Beatles 45’s which I loved. They also had Simon & Garfunkel, Jimi Hendrix (Are You Experienced?) and Moody Blues (In Search of the Lost Chord) that someone gave them. Huge influence on me. Later on I bought lots of stuff – Rolling Stones – Get Yer Ya Ya’s Out, Alice Cooper – School’s Out, Deep Purple – Made in Japan…and many, many more!

JS: By album do mean “full album” or specifically vinyl? The last full album I bought was Tame Impala’s “Innerspeaker”, digitally a week ago. Last CD I bought was Jack O’ The Clock’s “How Are We Doing?” Maybe a month ago?

CP: Can’t remember. Maybe the last Mommyheads record? I don’t buy CDs (or albums off iTunes or whatever). I listen to a lot of things on Youtube when I get a chance.

CM: I’m sorry, but this is simply an impossible question to answer. I can tell you what I’m really into now: rediscovering Eliot Carter’s orchestral music (He’s one of my favorite composers of all time), Prokofiev’s string quartets, and – my newest enthusiasm – an album called The Sound of Light in Trees by David Dunn. Dunn is a composer, phonographer, and acoustic ecologist (an area I’m starting to delve into in earnest). With the use of special microphones, he’s captured the sound of Bark Beetles, their larvae, and other happenings inside the wood of pinon pines in northern New Mexico: stunning.

VK: Changes all the time. 5 that have haunted me deeply for decades now: Ornette Coleman – Beauty Is A Rare Thing, The Kinks – Village Green

JS: Wow, extremely hard to pare it down to one. I would have to list a few that have stayed with me for a long long time, that I keep coming back to. Jimi Hendrix’ Electric Ladyland is one, The Clash “Sandanista” is another. Robert Ashley’s “Perfect Lives: Private Parts”. Philip Glass “Einstein on the Beach”. Yes “Tales from Topographic Oceans” ( I’m not kidding. ) Game Theory “Lolita Nation”. I like big pieces.

GL: Hard to pick a one. Here are three from my top ten list. English Settlement by XTC, Gentlemen Take Polaroids by Japan, Country Life by Roxy Music.

CM: When I was listening to a lot of Middle Eastern music some years ago, I found a disc called The Origin of the Lute, and album of oud music. I was expecting the different tunings and cool rhythm patterns that drew me to those musics, but it was very “westernized”: mazurkas and such, and the oud was accompanied by pianos and clarinets. I actually couldn’t tell you now if it was good or not. The disappointment lay in the fact that it didn’t meet expectations I had at that time. I played it once, was bummed, and put it away. Perhaps I should give it another try.

VK: As I enter my “cranky” stage I have to admit to disliking a lot of music out there, but I try to be polite. I’d say most of the last 10 or so Neil Young records have been a let down in one way or another. I love a lot of his music but really don’t care for most of recent output.

JS: There was a period in the late 70s where I became disappointed with a lot of the bands I loved – Queen’s “News of the World”, Pink Floyd’s “The Wall”, ELO’s “Discovery” (disco— very!), even to a certain extent Led Zeppelin’s “In Through the Out Door”. I’m still disappointed in these albums. But, you know, good stuff was coming in through the underground by then, so it was all OK. I replaced the Pink Floyd with Young Marble Giants, for example.

CP: Again, way too hard to answer. I’d rather not name them. Anyone that takes the time to produce an album should be applauded.

CM: The first one I remember distinctly was when my mom took me to hear Stan Kenton’s band. I was maybe 11 or so. That was fantastic. My first rock show was seeing Genesis (when my prog-rock enthusiasm was at it’s most rabid) in LA ; probably ’78 (high school). I believe David Lowery was with us for that one.

JS: The first big concert NOT attended was Lynyrd Skynyrd in ’75, when I won the tickets on the radio and my Mom wouldn’t let me go. I probably didn’t get to go see a real rock concert until 77 or so (when I was 13 or 14.) Then I saw a bunch, big and small, several rock bands on the UCD campus in Davis, CA, like Alternate Learning, Thin White Rope, The Suspects, I could see them even though I was in high school sometimes. We went to big concerts in San Francisco, like Rush and Jethro Tull.

CM: We heard the Taos Chamber Music Ensemble last week: works by Arvo Part, a couple of New Mexico composers who’s names escape me, but were O.K., and a Schubert piano trio, which contained a melody you’ve probably heard.

JS: I played last weekend… well, the last I went to see where I wasn’t playing was maybe Dungen?

CP: Gang of Four at the Gaelic Club here in Sydney.

CM: Again, this is hardly fair, I enjoy live music so much, and there have been so many good experiences, there really is no single favorite. One great time that comes to mind is seeing Frank Zappa at the Orange Show fairgrounds in San Bernardino. I enjoyed the performance, but I’m picking it because of the occasion (Zappa playing San Ber’dino in San Bernardino).

JS: My memory fades. Most recently I really enjoyed a Mono show. Besnard Lakes at SxSW last year. Björk at the Paramount in Oakland. Radiohead at Hultsfred Festival in Sweden.

CM: I do have a clear worst case: When my daughter was 8, I took her and three of her friends to see B’Witched, 98 Degrees, and some other R&B singer who was being marketed for ‘tweens. Those are the sacrifices we make for our children.

VK: Grateful Dead, mid 80’s, Irvine Meadows. I like the Dead alright, but that was intolerably boring.

JS: Queen, 1980, but only because I was super high and the guy in front of me was barfing, though raising his hands over his head and clapping between songs. Also I was disappointed that they played a tape for the vocal part in the middle of Bohemian Rhapsody!

CM: I do have a story about playing there during that ’86 tour. At least I’m pretty sure it was Pittsburgh, because I don’t think we went to Philadelphia…I believe I was recovering from a cold…hmm. At any rate, it was after the show, and we were wound up and wanted to go out. I went with a small group which included Michael Stipe, a gal from the R.E.M. entourage, and I think maybe Victor, though I could certainly be mistaken on that. We went to a coffee shop to have some tea or whatever and hang out a bit. We sat sippin’ and jawin’, then Michael takes out a little suede bag and dumps out a collection of crystals and colorful polished stones and starts playing with them; moving them around on the table, arranging them into patterns, and generally contemplating them. He pretty much dropped out of the conversation. The woman who was sitting next to me made a remark to the effect that, well, you know, Michael’s a creative guy, and he needs to do this. I recall feeling a combination of amusement and annoyance.

VK: The sound of the crowd reacting to Camper opening for REM at the Syria Mosque in 1986. Half boos, half cheers, and loud. And the onion rings.

JS: It’s pretty. We’ve played there a bunch in the past 25 years. First time was with the Cucumbers. My friend Andrew Weintraub teaches ethnomusicology there, I lectured in his class once a few years ago.

GL: Nothing stick’s out at the moment. I have a friend who just moved there for work and has invited me to visit. Any spots of special interest I should be aware of?

CP: I don’t have specific memories of Pittsburgh. I think I always enjoyed playing there. Correct me if I’m wrong!

Thanks so much fellas. It really is a thrill for me that you did this. The music you made together will live with me forever.