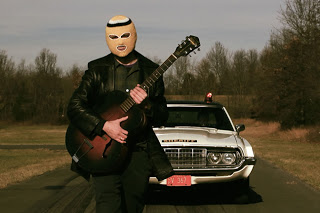 “This is James Olsen and his new band, The Malefactors of Great Wealth. James started music late and never took a lesson in his life. He was born in Cleveland but grew up in Ohio. It took forever. This is his first recording in a long time. It was recorded in nine locations over a year’s time. Before this he worked as an investigative journalist in New York City and was friends with two people who were later kidnapped by — and escaped from — the Taliban. One hit a Taliban over the head with a samovar and ran to safety. The other got out of Afghanistan because the corporation she worked for sent envoys with bags of cash to ensure her release. She was eventually found, unguarded but chained to a rock, deep inside a cave. James has delivered stereoscopic photos to spies, took a phone call from the head of the NSA, knew the Unabomber was going to be captured a month before he was, and discovered footage of government drug tests carried out on federal prisoners and made a documentary film about it. This is true. These are facts. James Olsen will never lie to you.”

As many times as I am contacted to promote a band on the blog, more often than not, I take the charge and reach out to musicians who interest me that I feel should have more exposure. Case in point, J.P. Olsen. I first discovered him as the songwriter of one of my favorite tracks off of Tim Easton’s fantastic ‘desert island disc’, “The Truth About Us“, ‘Bad Florida‘. For years I’ve been wondering what he has been up to since having actually had the opportunity to see him play the tune once at an otherwise disastrous ‘show’ a decade ago. I recently connected with him through the power of Facebook and am happy to say he is starting to play out as a trio around his home of Brooklyn (good vibes your way, man!) and has completed a unique project with, among other collaborators, The Black Swan’s Jerry DeCicca entitled, “You’ll Never See My Face in Kansas City“. Courtesy of Donewaiting, you can view videos and read more about the project here and buy some one of a kind merch here. My sincere thanks to J.P. for taking the time to participate in this edition of First/Last.

I don’t remember the first album I bought, but the first album I remember freaking out over was my brother’s copy of the The Who’s “Quadrophenia”. The first 45 I bought myself was definitely The Beatles’ ‘Revolution’, the heavy and fast version. I played that about 40 times in a row when I got it.

Too many too name, but I’d have to say “69 Love Songs” by The Magnetic Fields is up there and so is Side A of Lou Reed’s “Coney Island Baby”.

The one I haven’t made.

Genesis at The Cleveland Coliseum. I was in 6th grade.

All Tomorrow’s Parties in NYC this September. Scrawl, Dirtbombs, Afghan Whigs, Jeff The Brotherhood and Mark Lanegan (who was just incredible, I thought). All great shows one after the other.

My favorite concert ever actually went on for a number of years. There was a band called The Numbers Band that played Kent, Ohio on a weekly basis at a place called JB’s. The band, and its singer and songwriter, Robert Kidney, consistently put on inspiring shows week after week for years and years. I’m told they are still together, some 40 years on now.

I went to see The Cramps, who I loved, and somebody stage-dived onto my head and I had to go to the hospital. That was my least favorite concert by far.

I was in Pittsburgh last year for a week as part of the Steinbrenner Media Fellowship at Carnegie-Mellon. I’d never been to Pittsburgh and was a) blown away at how beautiful the city is and b) it made me want to live there and c) I was humbled by the fact that I met students at Carnegie-Mellon who were about half my age and twice as smart as me. I also ate great food when I was there, met really friendly people and had a really interesting few-hours long conversation with a brilliant criminologist about FBI crime stats. A memorable and great week for sure.

Thanks so much J.P. It’s was really nice getting a hold of you, man. Hopefully, seeing you play live in Pittsburgh happens sooner than later.