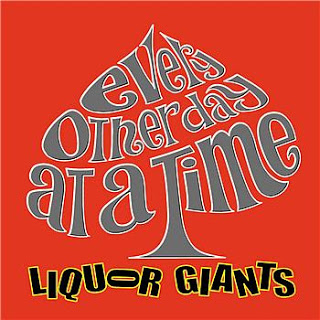 “Ward Dotson once said that he left the band the Gun Club because he got tired of playing for people in black leather who never smiled and he responded by forming the considerably lighter hearted hard rock outfit the Pontiac Brothers. Given this logic, it probably made sense that after the Pontiac Brothers called it a day in 1989, Dotson found himself moving away from the good-natured crunch of the Pontiacs and started indulging his fondness for ’60s-style pop and the result was a witty and tuneful new project called the Liquor Giants. The group released their first album in 1992, You’re Always Welcome (which was released in some overseas markets as America’s #1 Recording Artists), but from the start it was obvious that this was a “group” in only the broadest sense. Dotson, who handled guitar and lead vocals and wrote the lion’s share of the material, was the only musician who played on every cut of the album, with a round-robin crew of various L.A. cronies pitching in on bass, drum, and keys (among them former Pontiacs drummer Dave Valdez on bass; drummers Dan Earhart and Bill McGarvey, and keyboard man Dan McGough dominated the supporting cast). The material played down the hard rock stomp of Dotson’s work with the Pontiac Brothers in favor of hooky but enjoyably unpolished pop/rock tunes that made no secret of their roots in the sounds of ’60s AM radio.”

There are a few bands that will forever hold a special spot in my heart. I was turned on to the Liquor Giants by way of an interview I had with Timothy Bracy of The Mendoza Line years ago where he casually dropped the band’s debut as one of his favorite underrated albums. At the time (and frankly, I still do) hailing Mr. Bracy’s musical opinion as ‘Gospel’, I dug around to discover the few albums that were as incredible as they were obscure. I heard the band, and Ward Dotson in particular, described as the Big Star of the ’90’s. I’ll go with that. I love the band’s entire output but a favorite has to be it’s fourth record, “Every Other Day At A Time“, released in 1998 while I was coming out of my ‘psychedelic’ phase and unfortunately ignoring the music I would cherish later. My loss. Do yourself a favor and track this stuff down, you will love it, I promise. My sincere thanks to Ward Dotson for honoring a fanboy’s request to participate in this edition of First/Last.

Thanks so much, Ward. Needless to say, it means a lot to me that you were able to do this. If only I had a time machine to see your old band live.