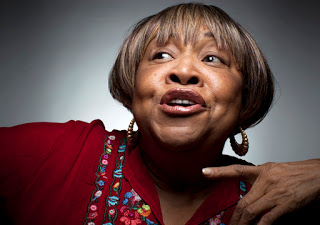 “All of these songs are me, but in a different way, with a different sound,” says Mavis Staples. “The phrasing, the tempos, the arrangements are different, but the messages are the same things I’ve been saying down through the years. They’re about the world today—poverty, jobs, welfare, all of that—and making it feel better through these songs.” With her bold new album, You Are Not Alone, the legendary vocalist adds a remarkable new chapter to an historic career. Staples is a Rock and Roll Hall of Famer, a Grammy Lifetime Achievement Award winner, and a National Heritage Fellowship Award recipient. VH1 named her one of the 100 Greatest Women of Rock and Roll, and Rolling Stone listed her as one of the 100 Greatest Singers of All Time.”

One of my earliest and most fond memories of rock and roll was my father taking us kids to see “The Last Waltz” at the King’s Court in Oakland when it was released in 1978. Initially, a lot of the movie slipped past my 11 year old conscience but an undeniable highlight was and still is The Staple Singers performing ‘The Weight‘ with The Band. Beautiful, indeed. Ms. Staples headlines the last day of the blues fest tonight at Hartwood. My sincere thanks to her for taking a few minutes to participate in this edition of First/Last.

Thanks, Mavis. Hopefully, the rain holds out tonight for the show. I have a feeling that if it does rain again, no one is going anywhere.