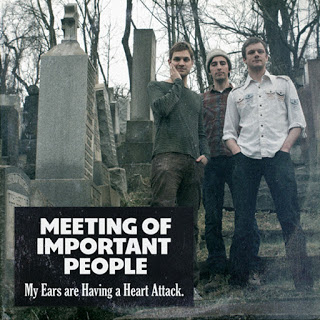 “Meeting of Important People is an indie pop band from Pittsburgh, PA. he band’s 2009 debut album on the Authentik label was named a top release by many blogs and radio stations, including influential station WYEP-FM. Their pleasant collections of creepy suburban indie-pop songs and high-energy live show grew to reach listeners world-wide, and the band is now proud to celebrate the August 2012 release of their 2nd full-length album (tentatively titled “My Ears Are Having a Heart Attack”), an eclectic mix of new songs chock-full of twists and turns. The band has recorded with producer Brian Deck (Modest Mouse, Iron&Wine), has starred in a heavily-viewed cardboard city music video, traveled extensively, gained airplay on terrestrial and satellite stations, and has shared the stage with renowned artists such as Ok Go, The Secret Machines, David Bazan, Dean & Britta, and Sam Roberts Band. Their recordings have recently been re-pressed onto vinyl for 2011 release by legendary garage label Get Hip, many MOIP songs have also been featured on E’s KEEPING UP WITH THE KARDASHIANS, MTV’s TEEN MOM, THE REAL WORLD, and JERSEY SHORE, web series OFF-BRAND, and CBS’ THE GHOST WHISPERER, among others– if you listened hard enough. MOIP keeps the loud parts loud, the pretty parts pretty, and the people happy.”

If you read this blog, even casually, you know my fanboy geek love runs awfully deep for this band. They are celebrating their (FANTASTIC!) CD Release show tonight at Smalls, bringing along Pet Clinic, Great Aunts, and Texture Ballet for support. This will be one fun time. My thanks to the guys, Josh Verbanets (Vocals, Guitar), Aaron Bubenheim (Vocals, Bass) and Matt Miller (Vocals, Drums), for taking a few to participate in this edition of First/Last. 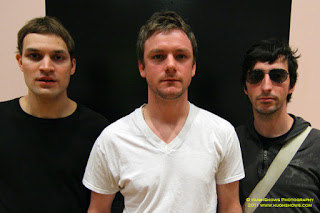 Thanks, fellas. This new album is really great! Tonight will be a blast!