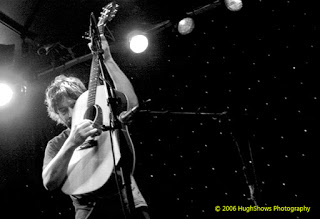 “Americana singer/songwriter Tim Easton has been driven westward both geographically and musically since his college days in Ohio. On his 5th album, Porcupine, the Joshua Tree, CA resident lets a myriad of guitar riffs rooted in blues, country, rockabilly and campfire folk set the color for observational lyrics capturing life from the desert to the sea. The new album finds Tim’s storytelling skills as sharp as quills, possibly inspired by his friend and pal Lucinda Williams. One of Porcupine’s shining moments is the wistful two minute pop-folk jangle “7th Wheel” (conjured by the same spirits that entered the room while Browne and Frey wrote “Take It Easy”). Easton, known for his incessant touring (from Dublin to Anchorage to Ft. Wayne to Jacksonville), will be on the road, supporting Porcupine for a long time.”

When you see ‘The Essentials’ tag in these Q&As subject lines of mine, take my word for it, I don’t throw around that distinction lightly. These are the artists who, for better or worse, have made an immense impact on my musical sensibilities. In other words, I am absolutely dumbfounded that they are being as cool as they are in answering my questionnaire!?!? I really can’t believe it as a fan. As a blogger, I am forever grateful. I discovered Tim Easton around the time he put out his second album “The Truth About Us” via his session men from Wilco. It still remains one of my favorite albums and I have been following Tim’s troubadour career ever since. He was from Columbus, now lives in Nashville and has a cult following in Alaska of all places, where he plays many times a year. I will be forever indebted to him for the hours of music appreciation he has given me over the years and for participating in this edition of First/Last.

Thanks so much Tim. It’s been way to long since you’ve played here. Looking forward to the November gig, man. For what it’s worth, I was also at that Dead show and I shit you not, me and my friends might have thrown some change your way…if that was you?