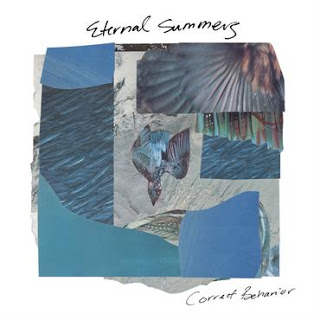 “What do you do when the guitar you wrote all your songs on gets stolen mid-tour and you’re too practical to run out and jack up your credit? This might not seem like a major problem for most bands, but when you’re the sparse duo of Eternal Summers and you are relying on that Parker Nitefly to compensate for high and low end, you can’t help feeling a bit exposed. After a futile appeal for sponsorship, Nicole Yun experiments with the Fender Telecaster she has on hand. She recognizes that while it cuts like a knife and has a gorgeous high range, it is missing that low edge. Suddenly glad that she and Daniel Cundiff never made a pact to remain solely a two-piece, they decide it is time to add a bassist. Daniel says, “Nicole and I had been bouncing the idea of adding a bassist around for a year or so because we were writing more complex songs and it seemed a disservice to the songs not to have the low tonal quality that a bass would provide.” Given the recent circumstances, they move into action.”

The now trio Eternal Summers released it’s sophomore record, Correct Behavior, this week on Kanine Records. I am really loving the lush ‘poppiness’ of this album. Serious contender for my year-end list for sure. My thanks to Nicole Yun (Guitars/Vocals) for taking the time to participate in this edition of First/Last.

Thanks, Nicole. Beleive me, the Warhol always seems to have that effect on people, whether you are from here or not.