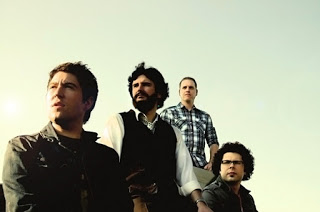 “Appearing on Indie Rock Café’s list of Best Songs of 2011 and described as a band to watch, Falling Andes is a 5-piece American indie alternative rock band formed in Pittsburgh, Pennsylvania in winter 2011. The group is composed of Dan Peluso (guitar, keyboards, lead vocals), Jordan Wood (keyboards, backing vocals), new addition / chick drummer Toni Crough (percussion), Mike Boyer (lead guitar), and Mike Radage (electric bass). The music of Falling Andes is a comfortable-yet-boundary-pushing fit with the new wave of 80s-inspired throwback but more-meaningful-this-time-around-we-swear synthpop and has been described as “catchy” with “easily digestible hooks … with a flavor all their own.”

The band plays it’s first show of the summer tonight at Brillobox with Balloon Fantasy Ride and Mike Cali on the bill. My thanks to vocalist Dan Peluso (his views, not the band’s) for taking the time to participate in this edition of First/Last.

Thanks, Dan. TNMT? Live? What even was that?