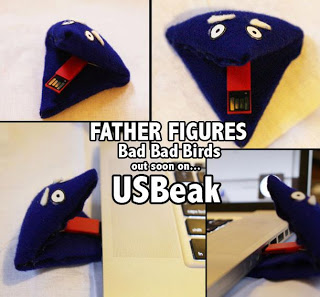 “Father Figures, the band that just will not die, has been a band for four years, starting from the humble rumblings of a Brooklyn basement. Now we’ve released a vinyl album (“FATHER FIGURES”, out now), been on a nationwide tour, and completed a new batch of recordings with studio wizard Shane Stoneback. Come to a show to get steamrolled live. Father Figures is a 5-piece zombie jazz group formed in 2006 by a group of friends dedicated to the art of improvisation. We create dynamic instrumental music with mostly improvised sounds, but in such a way that appears composed — and all the while we move toward the collective goal of listenability, fun, and spontaneity. This is our recent exciting contribution to the world of music sharing: the USBeak! The Bad Bad Birds EP is copied onto the USB port, i.e. the tongue of the beak-creature. Each one is a unique handmade craft, and we’ll be selling them on the road.”

The instrumental band can be found on Facebook, Tumblr, and Bandcamp. They hit Pittsburgh tomorrow at The Shop with fresh off their CD Release locals Sleep Experiments supporting. My thanks goes out to Spencer Zahn (Upright Bass), Jas Walton (Tenor Sax), Ross Edwards (Keys) and Adam Schatz (Tenor Sax, Effects) for taking the time to participate in this edition of First/Last.

Thanks, fellas. Love the unique USBeak idea. Anything different to add to the music biz is cool in my book.