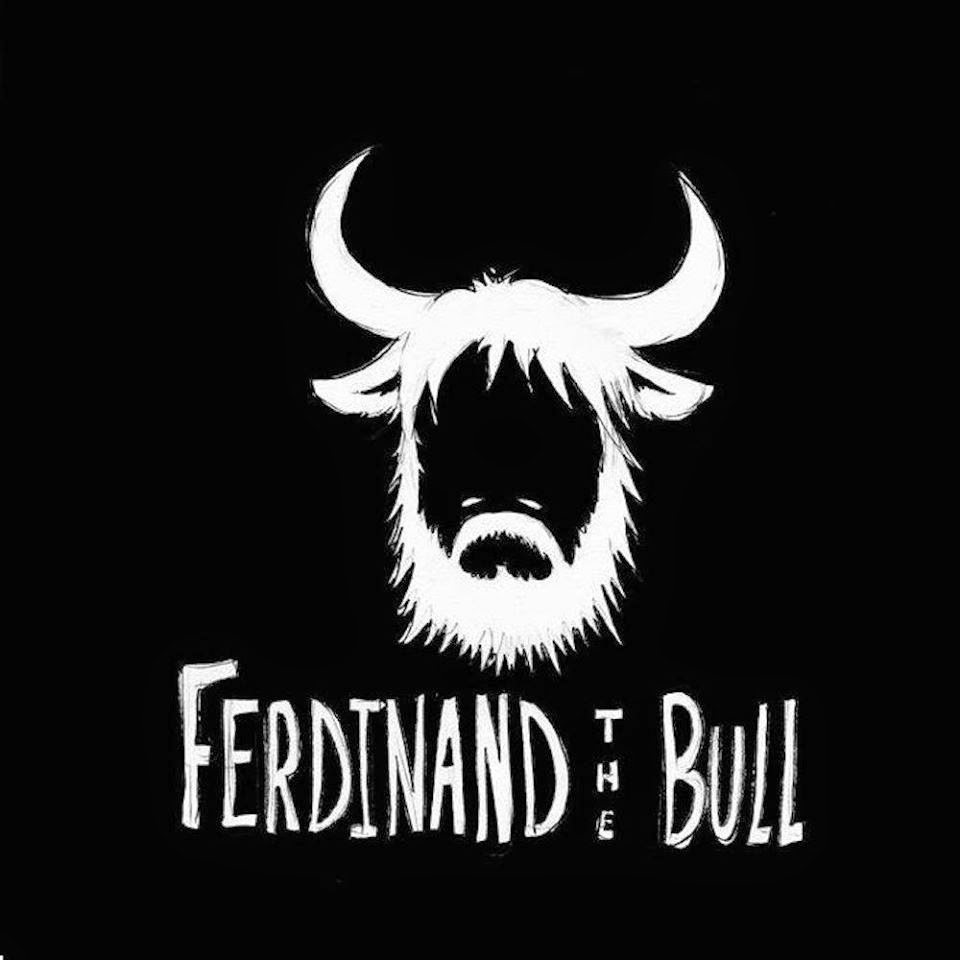 “This story started in a basement in Kutztown, PA. Over one inspired, turbulent summer home from the University of Pittsburgh, Nick decided it was time the world heard his stories. He wrote a collection of acoustic-based songs with the modest goal of sharing them with anyone who would listen. Calling upon neighborhood friend Evan for musical depth, Nick got down to business in his parents’ home and recorded the tunes: what would become the Ella EP. Upon their return to Pitt, the pair showed their work to school friend and fellow musician/cellist Dan and his friend Mike Dice to fill out the sound, and the quartet began its musical journey together.”

Ferdinand the Bull is the ‘youngest folk-rock powerhouse’ in Pittsburgh. They have playing out live for about a year now and you can check out their recently released debut Eponymous EP. I want to thank Nick Snyder (Guitar), Dan Radin (Cello), Evan Altieri (Banjo), and Mike Dice (Bass) for taking the time to participate in this edition of First/Last.

Nick Snyder: The first I ever had was “Sweet Baby James” by James Taylor. The first album I ever bought, though, was “Led Zeppelin III”.

Dan Radin: “Astrolounge” by Smash Mouth was a gift from my parents with my first boombox for Hanukkah when I was 8.

Dan: “Torches” by Foster the People, worth every cent.

Nick: This is way too hard of a question, so I think I’ll narrow it down to two albums, The Head and the Heart’s debut album, and “Is This It?” by The Strokes.

Dan: “Born to Run”, Bruce Springsteen. Track for track the best album ever and the thing I aspire most to achieve.

Evan: “Around the Well” by Iron and Wine.

Mike: The Beatles “Let it Be… Naked”.

Nick: I used to be very much into Flogging Molly, so I’m going to have to go with “Float”. I just did not like that album at all, unfortunately.

Dan: “Ghost Stories” by Coldplay. Bland experimentation that did not hold up to expectations from one of my favorite bands.

Evan: “I’m With You” by the Red Hot Chili Peppers.

Nick: My first concert was probably James Taylor. I wasn’t old enough to appreciate him, though. I’d say the first time I really remember going to a concert was Jethro Tull – they were/are/will always be phenomenal.

Dan: The Clarks, First Niagara Pavilion in Pittsburgh. They played a ‘Homegrown Hoohah’ with Donnie Iris.

Nick: I went to Governor’s Ball in NYC this summer, and that was absolutely fantastic. I was actually the first one to buy the 3-day pass – I waited up all night for tickets. The Strokes, The Head and the Heart, Frank Turner, Jack White, Outkast, the Kills and many more played there – it was one of the best experiences of my life. I caught the drummer from Frank Turner’s drum head and it was signed by all the members and dated and everything.

Nick: Not counting GovBall, I saw The Avett Brothers last March and I had never been so impressed.

Dan: Paul McCartney. First show ever at Consol in Pittsburgh. He played 3 plus hours and told stories about The Beatles and Lennon and traveling and growing up. Some real insights into the songs and lives, and will be the closet we will ever get to seeing The Beatles.

Evan: Jack White at Governor’s Ball 2014 or Edward Sharpe and the Magnetic Zeroes.

Nick: I can’t really think of anything, to be honest. For some reason I found Foster the People not extremely great when I saw them. They’re still good, I just wasn’t too impressed.

Mike: I feel bad for saying it, but Henry Grimes in 2009. He had to follow Ron Carter though so that might have something to do with it.

Nick: Pittsburgh is such a hidden gem. We’ve got a great music scene going on here, and I love it. My favorite experience thus far in the city was Light Up Night last year. Everyone just came together for ice skating, public drinking, smoking cigars, dancing in public, walking across bridges, and Market Square is just great.

Dan: Pittsburgh’s music scene is really unique and I’m happy to help nurture it and be part of it. Pittsburgh is the best place in the world to call home.

Evan: Light Up Night 2013 was really fun. Hanging out in market square with my friends is always a lot of fun.

Mike: It’s home. It’s where my family is, it’s where I grew up, it’s where my best friends are on Holidays. We’ve got the Steelers, the Buccos, and the Pens but we also have some amazing cultural institutions and the worst accent in the country. It’s a funny town and I love it.

Thanks, guys. Really digging your vibe. I am really looking forward to seeing you out soon.