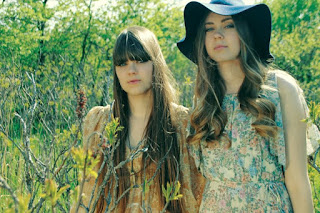 “Bittersweet is the word the Söderberg sisters prefer. “We likebittersweet songs, songs that affect you differently depending on howyou interpret them,” says Klara, the younger of the Swedish siblingsthat make up First Aid Kit. “Making the melodies and lyrics head indifferent directions is very deliberate,” adds big sister Johanna, “Asong like ‘Emmylou’ sounds cheerful, but the lyrics are the saddest thing you ever heard.”
First Aid Kit’s first American-recorded album, The Lion’s Roar dueout in January 2012, juxtaposes sadness and beauty in the besttraditions of folk and country music. They even cite the Louvin Brotherscheerfully brutal version of the old murder ballad ‘Knoxville Girl’ asthe perfect example of the sweet and sour they adore. And this carefullyconstructed collection deftly succeeds in setting references to theirhome town of Stockholm and long dark Scandinavian winters against an unforced backdrop of country-rock swing.”

The siblings Pittsburgh debut is tonight at Altar Bar with locals The Red Western opening. My thanks to Klara and Johanna Söderberg for taking the time to participate in this edition of First/Last.

The last album we bought was Father John Misty’s “Fear Fun”. Father John Misty is the project of J. Tillman who used to be the drummer in Fleet Foxes. We’ve played with him several times and he’s always been amazing, but this record took it to another level. The songs are prefect and his voice is beautiful.

This is an impossible question to answer! We have lots of favorites. Among them are “Greatest Hits” by Leonard Cohen from 1975, “Bridge Over Troubled Water” by Simon & Garfunkel and “Blue” by Joni Mitchell. Those are classics that we return to again and again.

We can’t think of one.

The first concert we ever attended must’ve been one by the band our father played in during the 1980’s, called Lolita Pop. They had a “re-union/revival” show in Gothenburg, Sweden when we were kids in 1997. We thought our dad was a rock star and we were very proud.

We haven’t been to a concert in ages, actually. We saw a bunch of great shows at the Coachella festival in April though. Bon Iver, Laura Marling, Feist, St. Vincent among others. All fantastic stuff, especially Bon Iver. We were surprised by how good he was live. He and the band sounded even better than the records, and they’re sublime.

Klara: We saw Jenny Lewis in 2008, at a small club in Stockholm. We had played live a couple of times before then, but we were just starting out. Seeing this fantastic, confident woman completely bewitching every member of the crowd was so inspirational. She has this way of making every word meaningful when she sings, and live it’s even more noticeable through her expression. She had a constant smile on her face.

Klara: My second concert ever attended was at the Globe Arena in Stockholm when I saw the singer Anastacia. I was probably 8. She has the most dreadful voice I’ve ever heard, but I really wanted to go because it was such a big deal going to a big arena concert and I got the tickets for free.

Johanna: I went along with my friends to a death metal show in Stockholm. The band was called Dissection. I try to have an open mind when it comes to music but I realized five minutes into the set that death metal just isn’t my jam. The entire show was a bit like torture to my ears but I sat there anyway trying to endure it, ha-ha. I was a teenager who really wanted to be all goth and alternative at the time.

Honestly, we don’t know much about Pittsburgh. All we’ve heard has been good stuff though. Like, it’s the best city in America to live in. When we hear the word “Pittsburgh” we immediately think of the line from Simon & Garfunkel’s song “America” where they say “Kathy I said as we boarded a Greyhound in Pittsburgh”! That song has some of the best lyrics we’ve ever heard.

Thanks, gals. I totally agree with the Jenny Lewis love. She was just so great when I saw her too.