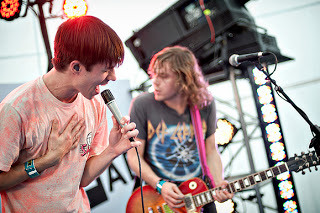 “Cult Minneapolis rockers Hockey Night split up a couple of yearsbback, and for a time mainmen Scott Wells and Paul Sprangers continued to operate under that moniker. They altered their musical orientation, got signed to DFA, and recorded an album with LCD Soundsystem’s James Murphy playing bass and manning the mixing desk, and Pat Mahoney on drums. FACT was fortunate enough to hear a few tracks at DFA HQ last year and can tell you that they sound great – very un-DFA in a way, with
a real high-fidelity, guitar-heavy and totally unironic AM-rock sound reminds us of Tom Petty and great summers. And now…
The band is a quintet – Sprangers and Wells are joined by Geoff Bucknam, Nicholas Shuminsky and Evan Wells – and they’ve changed their name to Free Energy. DFA are currently giving away a free track by the band, ‘Dream City’, taken from the forthcoming album. It’s the first publicly available material by Free Energy and it’s brilliant, obviously.”

The band is touring this summer, previewing tracks from their upcoming album “Love Sign” and stop in Pittsburgh next Thursday. Bandleader Paul Sprangers was nice enough to participate in this edition of First/Last.

Thanks, Paul. Digging the lead track off the new LP.