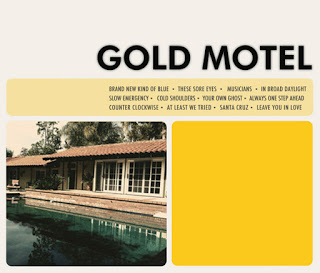 “With Gold Motel, it’s always summer, the bags are always packed, and the car is always running. Beneath tight pop hooks and warm melodies, Gold Motel’s songs are infused with joyous exuberance as well as sweet melancholy. The Chicago-based quintet originated in warmer climates, Los Angeles in the summer of 2009. Greta Morgan (The Hush Sound) returned from a year in Southern California to her hometown of Chicago, bringing with her what would become the five song Gold Motel EP. Collaborating with her friend Dan Duzsynzski (This Is Me Smiling), recording began on a set of sharp, sunny pop songs with a decidedly West Coast outlook. Working with Duzsynski, Morgan realized that her pre-conceived solo project could grow into a full bandeffort.”

I have been a long time fan of Gold Motel, who have just released their sophomore self titled album and I can attest, it’s as great as their debut. My thanks to Greta Morgan (Vocals/Keyboard), Dan Duzsynski (Vocals, Guitar). and Eric Hehr (Guitar) for taking the time to aprticipate in this edition of First/Last. 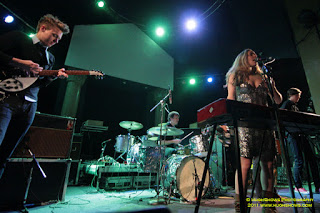 Thanks, guys. Hopefully a Pittsburgh date is in the works for the tour!?! Would love to see you again.