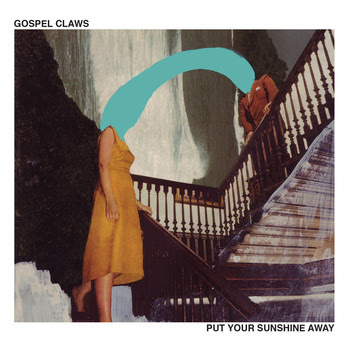 “Ex-Dear and the Headlights guitarist Joel Marquard and his new band release five soulful pop gems in their debut Self-Titled EP Gospel Claws. Simultaneously serious and tongue-in-cheek lyrics in the tradition of Morrissey or Jarvis Cocker leave you unsure whether to laugh or cry. Retro production techniques, classic pop songwriting and a dose of gospel soul true to their name produce a magically accessible first outing from these guys.”

Check out the band at their official Website, Facebook, Twitter, YouTube, SoundCloud, MySpace, BandCamp and Last.fm. Continuing coverage all this week of the Paste 50 States Project, I stay in Arizona with Gospel Claws. a self-described ‘folk-thrash band that writes melodramatic pop songs’. I just describe them as fantastic and want to thank Joel Marquard (Guitar/Vocals) for taking the time to participate in this edition of First/Last.

I think it was an album called “Snakes in the Playground” by a Christian hard rock group called Bride when I was about 13. I realized I should probably start listening to rock music, since I was newly a teenager and that’s the stuff my older adopted brother liked. He also liked this band called Undercover and i really liked their album called “Balance of Power”. I guess all the guys in the band had some serious wife problems and maybe even a death, and it was a very sad album. Then at about 15, my friend showed me Smashing Pumpkins and The Doors, which was a little more fitting to my tastes.

Gospel Claws opened for Parquet Courts and I bought their album. It’s really, really good. But the last album I bought at a record store was U.S. Girls “Gem”. It’s pretty awesome… better music videos though.

The Velvet Underground and Nico. Lou Reed did this super weird show a couple years ago about a mile from my house. It was kinda insane for me to see him in real life and so close to where I live. When he came out from back stage, he walked so, so slow like he did not give a fuck… and he didn’t.

Probably Girls’ “Father, Son, and Holy Ghost”. The production on it was really bad. Their first album was self-produced and so great, but this one they did in a fancy studio and it sounds like shit and has no life to it.

Some super small time concert at the church I went to. Me and my friend we so stoked and even tried to dye our hair. I tried to stage dive. Landed on some girls who didn’t know to catch me and I landed head first on thin carpet laid on concrete Was knocked out for about 10 seconds and went to the hospital for a concussion. Either I always had ADD… the tired, depressed version, or I got it that night. My mom always brought it up when she saw my grades… But I think my first real concert was Smashing Pumpkins at America West Arena when they toured on ‘Mellon Collie’.

Last concert with my new band, Samuel L Cool J!!!! Us, with Jack Littman (from L.A.) and an Arizona favorite, Black Carl. It was a great night.

I saw Joanna Newsom in a 100 person capacity art space called Modified Arts in downtown Phoenix on her first tour on a 1 foot high stage and I was about 4 feet away from her. Also, same situation with Arcade Fire. The whole room was floating.

I was on tour with my old band in Pittsburgh and we played at this beautiful church type venue and I thought the neighborhood was really beautiful. I really love the east coast. We also had a problem with our keyboard power supply and the Guitar Center there totally hooked us up.

Thanks, Joel. As I have been expressing to most all of the bands in this week-long series of mine, it would be really great to see you play here in Pittsburgh. I have been really enjoying your music, man.