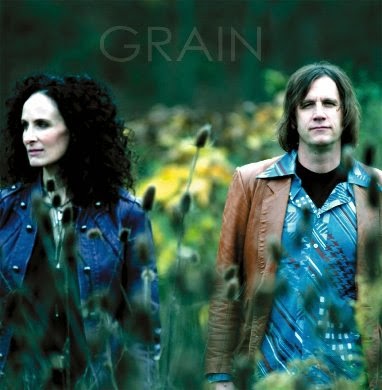 “The humble beginnings of what woul become GRAIN began at a books & music store, in Pittsburgh, PA., as Wayne Smith (guitars) and Carla Simmons (vocals, words) perfected the art of avoiding customers and hiding from management, all the while working on plans to start a rock and roll band. The mutual experience of growing up on 70’s rock along with an appreciation for country music, disco, punk rock, and the 8-track tape would help shape the vision for straight ahead, guitar driven songs with lush arrangements and a raw sensibility. Grain has been rocking the steel city, as well as taking their act on the road. Come on, grab your Terrible Towel and check out the band Amplifier Magazine calls, “…one of the most exciting bands to watch.”

Check out the band at their official Website, BandCamp and Facebook. The Pittsburgh rock duo’s third release is called “Echoes in the Air” from 2012 via Orange World Records. Much thanks to Wayne Smith (Guitar) and Carla Simmons (Vocals) for taking the time to participate in this edition of First/Last.

Thanks, guys. Yeah, Wayne, that Band show at Metropol is LEGENDARY for being so damned horrible.