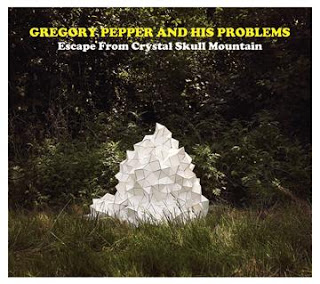 “A native of Guelph, Ontario, Pepper was acclaimed for his 2009 release With Trumpets Flaring, which was hailed as “conceptually minded and very, very clever” (The Torontoist). Some even pointed out that, “Pepper taps into the demented genius/ ambition of Brian Wilson for his orchestral pop songs, which are head- scratchingly great” (Exclaim!) and that “this is an intelligently crafted pop album” (Chart Attack) . But while Trumpets was experimental and admittedly lo-fi, Escape From Crystal Skull Mountain is more boisterous and confident, meticulously arranged and produced. Moreover, it features killer performances by Toronto-area musical dignitaries, hand picked from the ranks of Bry Webb and the Providers, Ohbijou, Cuff The Duke, Do Make Say Think, and The Niagara Symphony Orchestra.”

Gregory Pepper & His Problems latest release, “Escape From Crystal Skull Mountain” comes out tomorrow on Fake Four Inc. My thanks to Greg for taking some time to participate in this edition of First/Last.

The first one I bought with my own money was “Appetite for Destruction” by G & ‘F’n R! My mom took one look at that weird rape illustration on the inside of the cassette insert and she flipped!

I’m slightly embarrassed to say it was “15 Big Ones” by The Beach Boys. It came through the thrift store that I work at the other day and I just couldn’t resist. It’s terrible!

It seems contrived, but I gotta go with “SMiLE” by The Beach Boys. I’d been collecting bootlegs of the 1967 version for years, just marveling at what could have been. And then that awful Brian Wilson version came out and nearly spoiled it until they finally released the original version last year and I creamed my fucking jeans!

You know who really broke my heart? Weezer. Their first two albums filled the void left by Kurt Cobain’s shotgun, such sweet melodies and heavy production. And then what do they do after a self-imposed 5 year hiatus? The Green Album? Maladroit? Make Believe?!? It’s like when the guy in Office Space says every day you see him is the worst day of his life, because it’s comparatively worse than the previous day. That’s how I feel about every Weezer album released after 1996.

This is on some 1990’s Canadiana stizz: Rusty, at the University Center in Guelph, around 1995. I was in junior high and I felt nervous and uncomfortable, most likely because I hadn’t yet embraced the joys of drugs and alcohol. It probably sounded like this.

I don’t go to many shows but I kinda forced myself to get out there at NXNE last month. You know who was really good? Again, on the mid 90’s Canadian tip: Limblifter! Americans have no idea what I’m talking about, but this was the shit when I was thirteen!

Saw the Dead Milkmen at The Congress in Chicago last year, that was pretty great. Joe Jack Talcum hit on me in the washroom shortly before their set.

The only times that I’ve felt really disappointed after a show have been at my own. I’ve got all these things in my head that I want to articulate on stage but just can’t seem to do it…

Thanks, Greg. Nice pick on SMiLE! I wasn’t the bootleg hound from years ago but man is that official release outstanding!